There were five sculptures inside the National Museum of Wildlife Art that really caught my attention. 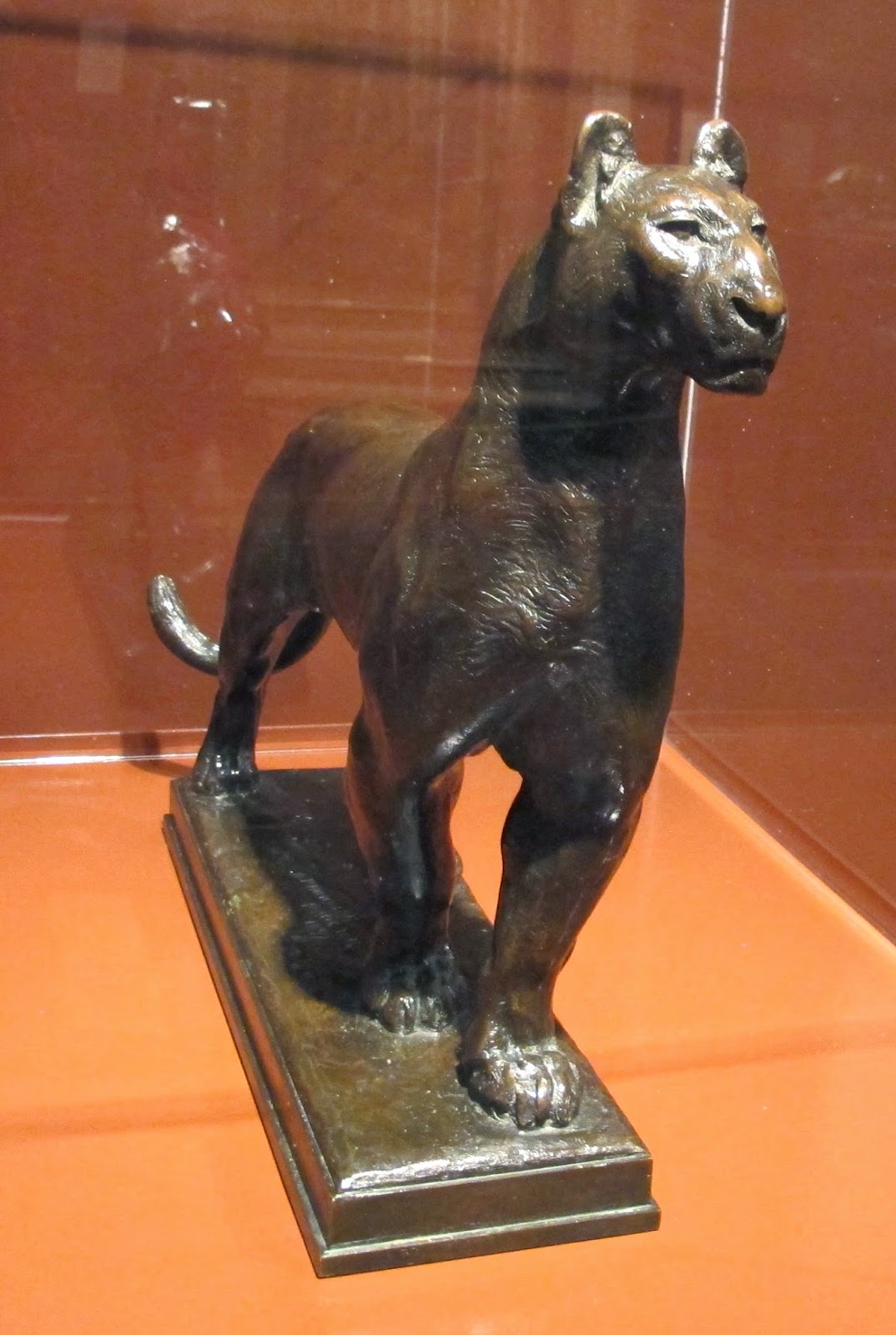 One was the Puma by Alexander Phimister Proctor - 1916.   As a young boy, Proctor loved to hunt and sketch around his hometown of Denver, Colorado.  Denver's Civic Plaza in front of the Denver Art Museum has two spectacular bronze sculptures by Proctor, one of a cowboy and his horse, the other of an Indian on his mount. 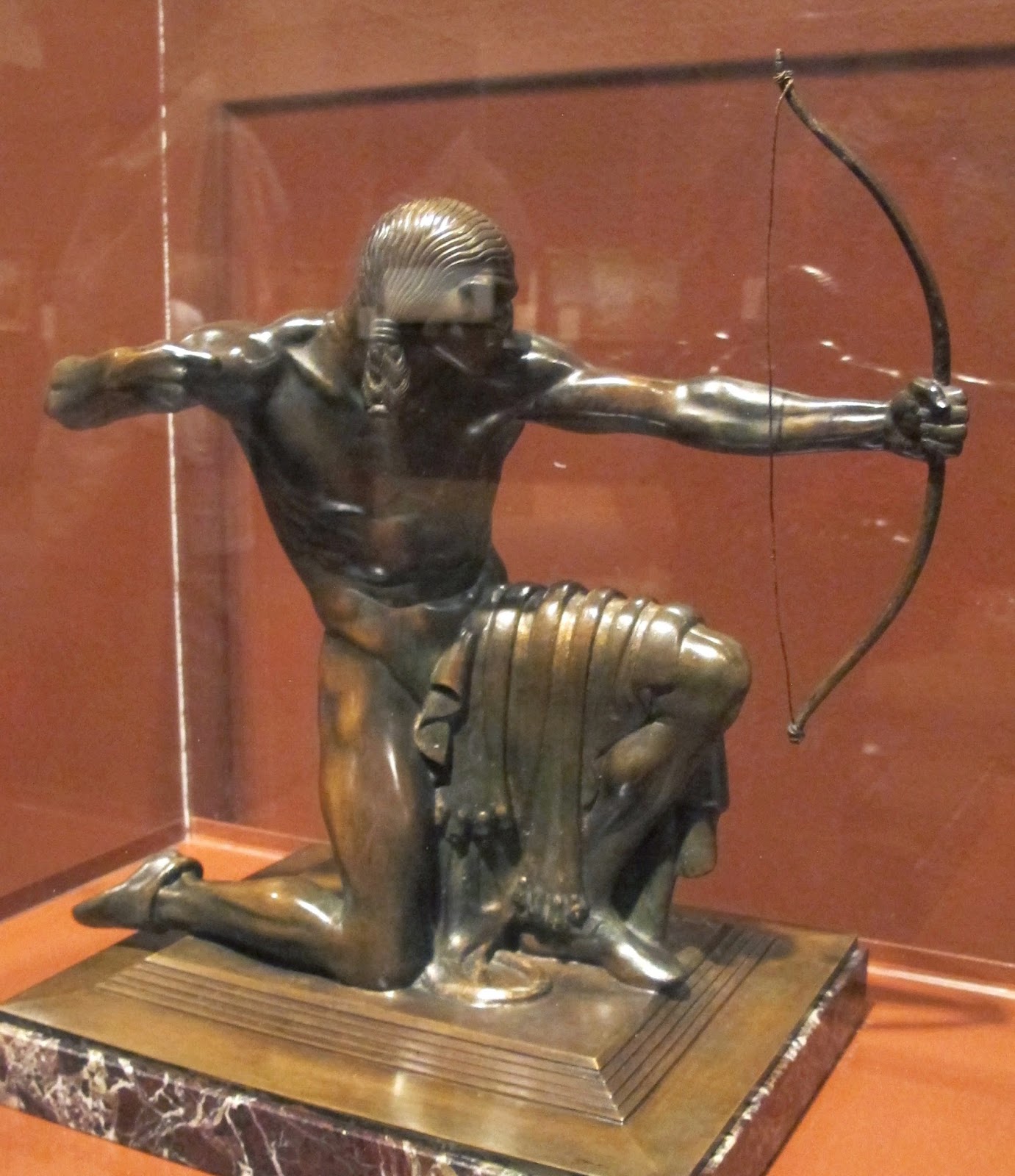 Paul Manship's Indian and Pronghorn Antelope are spectacular.  (1914)  He studied the American Academy in Rome where his style was strongly influenced by the Roman, Greek and Egyptian works.  Such refined, delicate work.  The Indian is modeled after a sculpture of Hercules. To me the antelope is typical of the time with is Art Noveau influences.  One similar to the deer found on the Tourist Pottery of the 1920's from Tonala, Mexico.
If you look closely, you will see the Indian was successful in wounding the antelope with his arrow. 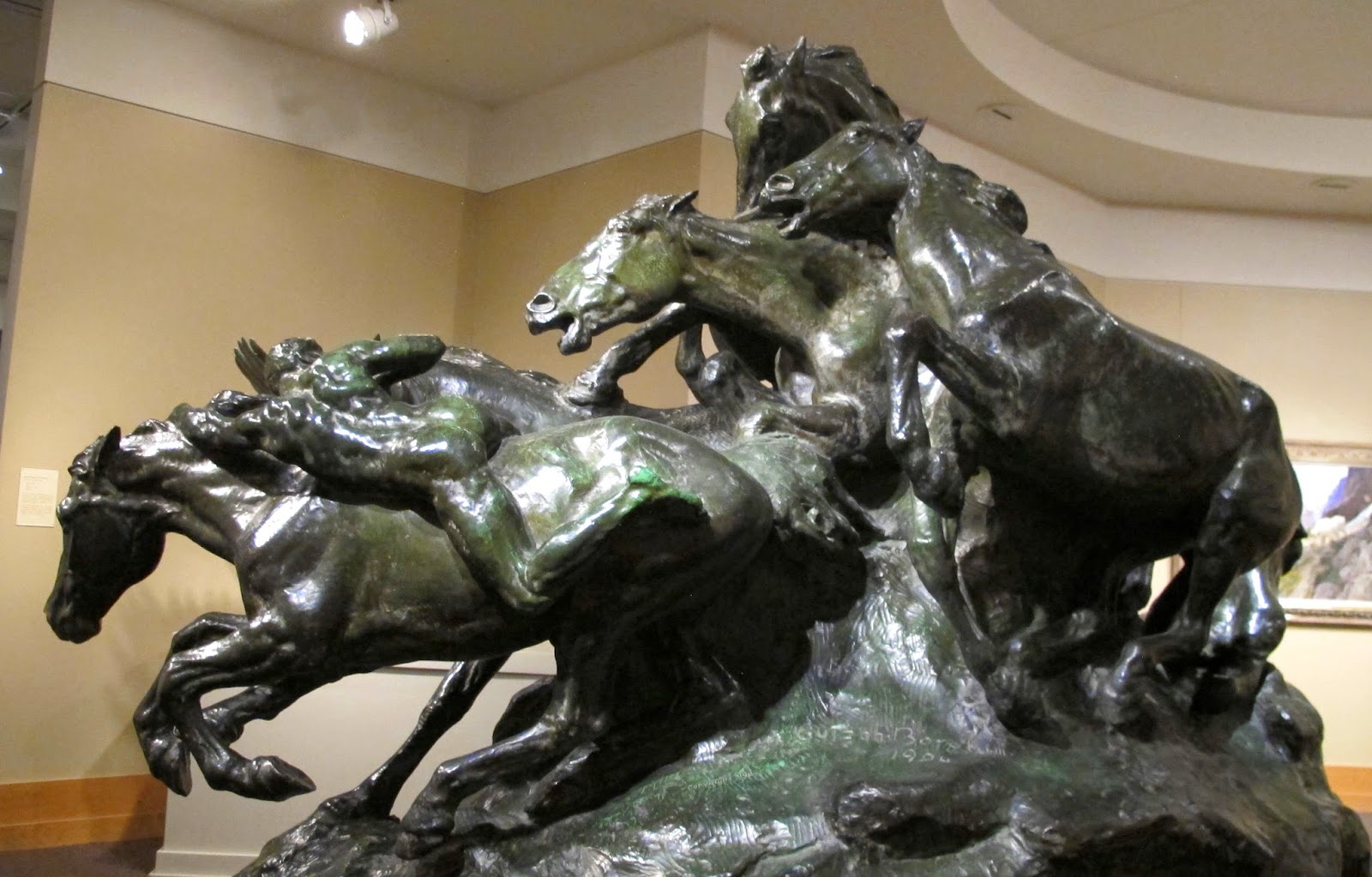 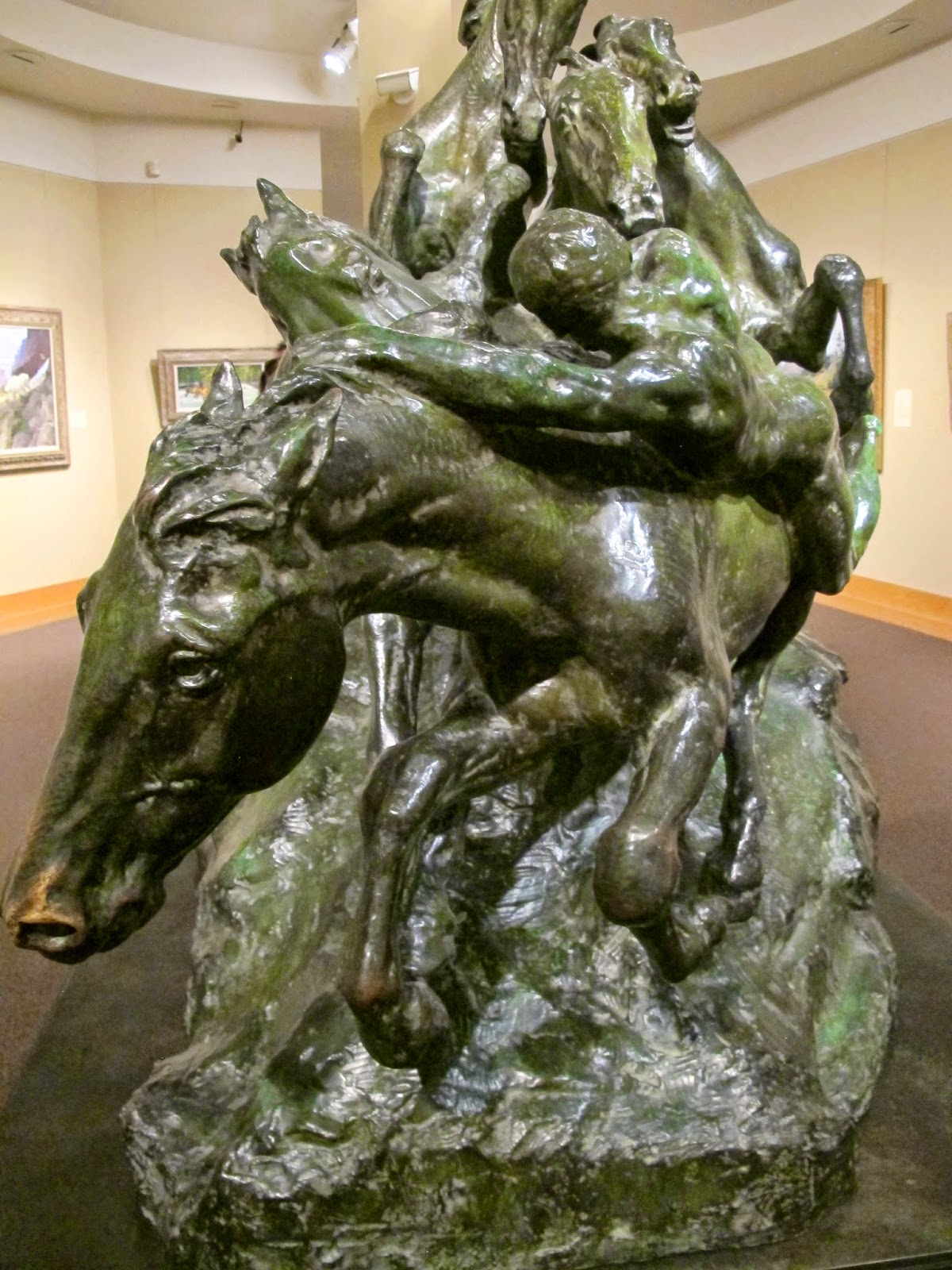 Growing up in the west, he portrayed the charging horses as way to capture the true essence of the wild west. 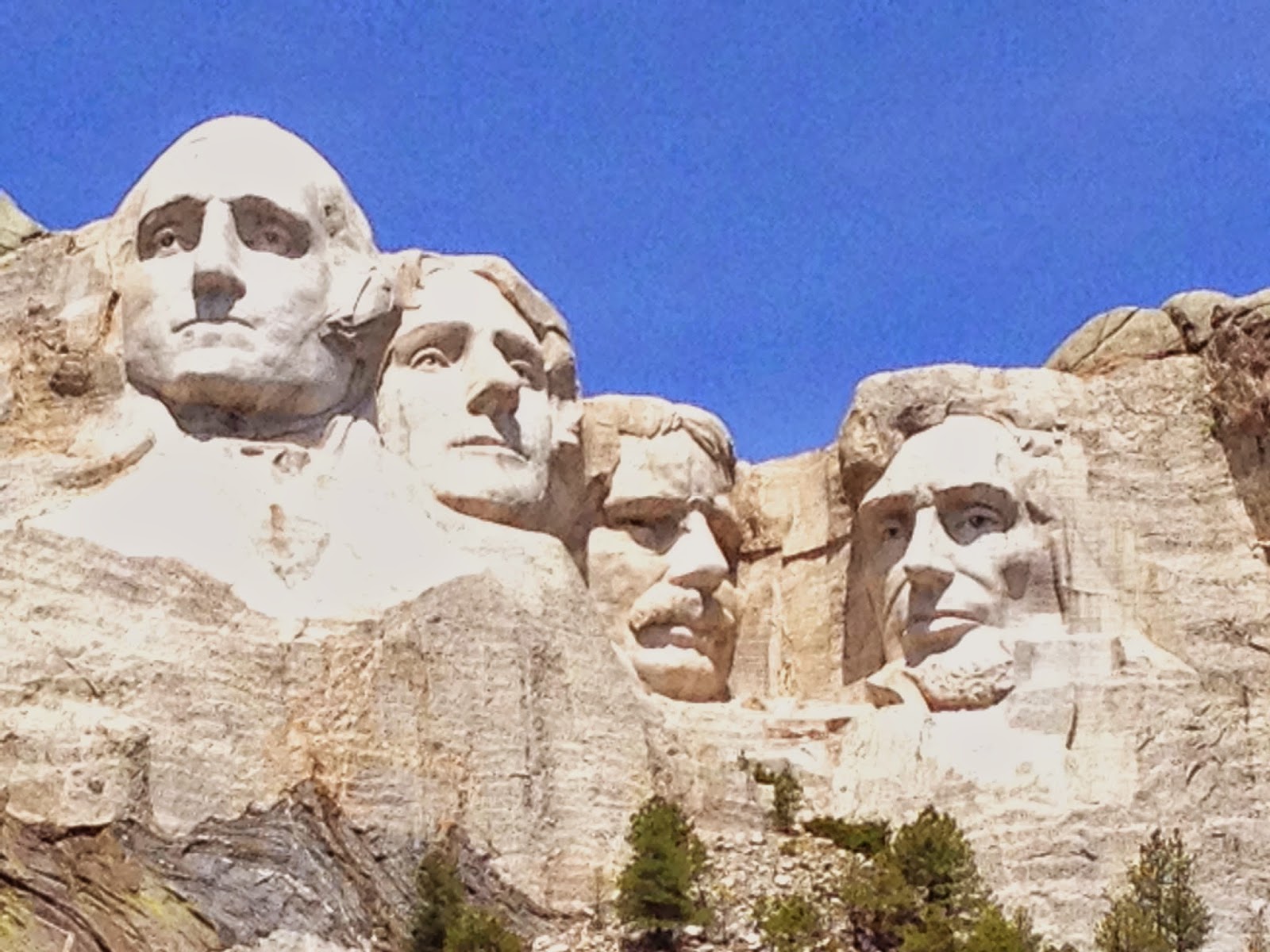 Borglum is best known for his portraits of Washington, Jefferson, Lincoln and Roosevelt that were carved into the side of Mont Rushmore.

The museum in Jackson Hole, Wyoming is one not to be missed!

Posted by Robin Mullen at 6:00 AM 0 comments

Email ThisBlogThis!Share to TwitterShare to FacebookShare to Pinterest
Labels: Jackson The art inside the National Museum of Wildlife Art was just as impressive at the exterior sculptures.  The Canadian Lynx by German artist, Carl Rungius was magnificent. Runguis was considered one of the best wildlife painters of his time.  His reputation was enhanced by a trip to the Yukon Territory in 1904. 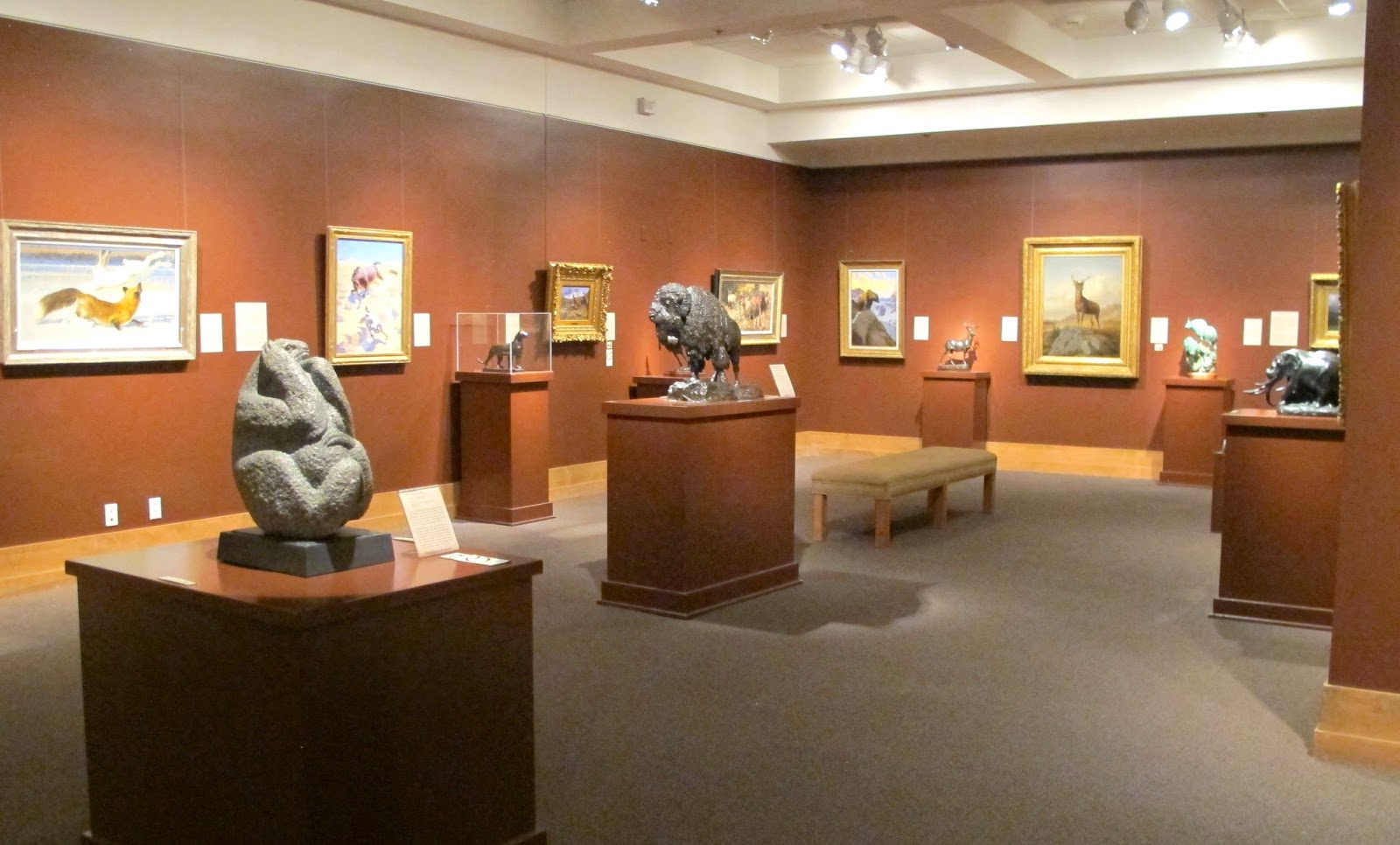 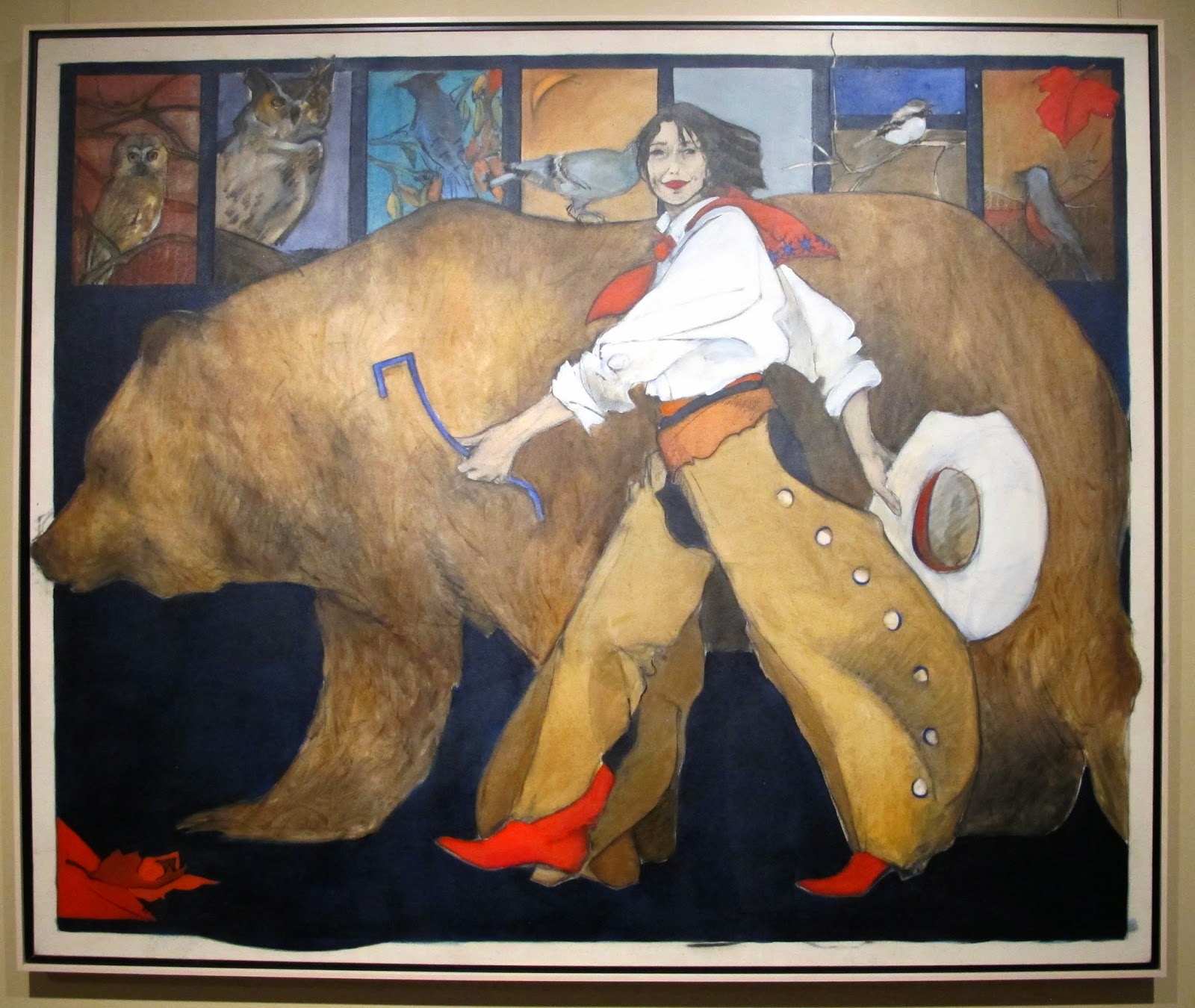 Legends by Donna Howell-Sickles.  Howell inspiration came from a postcard that she had received featuring a cowgirl smiling with bright-red lips.  from then on, this cowgirl has become the central theme of many of her works.  "The cowgirl symbolizes independence, noble spirit, a woman unafraid of challenge and the power of seeing joy in everyday life.  Her animals often stand for an obstacle and inner strength."  I totally agree! 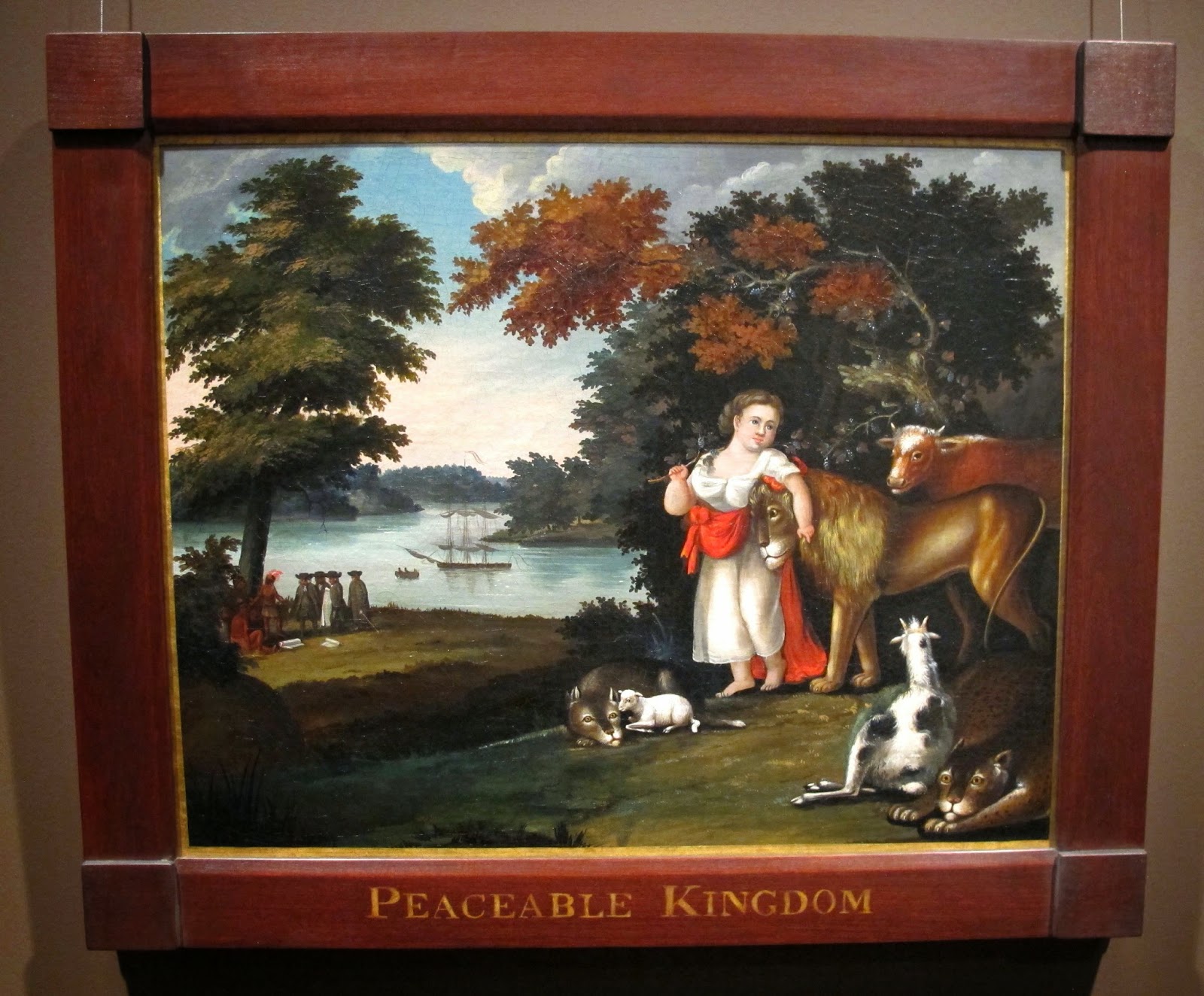 Edward Hicks painted over sixty versions of the Peaceable Kingdom from 1822 - 1825.  Hicks was a Quaker minister and commercial sign painter.  His beliefs prohibited decorative art and by painting biblical passages into his work, he could get around that.  In the background, you will find William Penn signing a treaty with the native Indians, another act of "peace." I have always adored the still life painting of a fish by William Merit Chase at the Denver Art Museum. I love the darkness of the canvas showcasing the shiny, slippery fish.  So I was very excited to see this Still Life: Cod and Mackerel in this museum.  Chase lived in Venice, Italy in 1878.  He would borrow fresh fish from the market, paint quickly and the return the fish to the fish mongers before it spoiled. 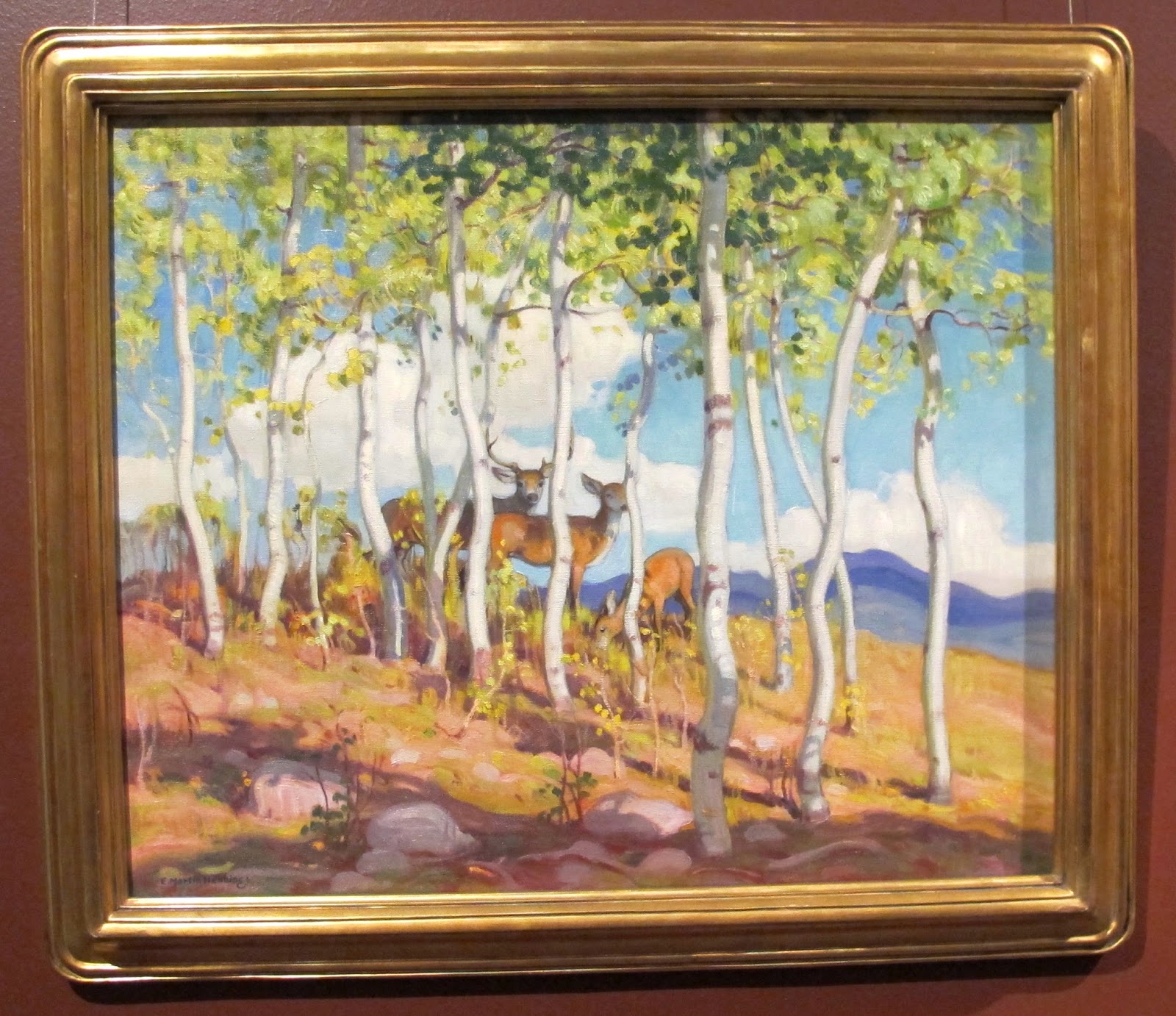 Ernest M. Hennings Deer Among the Aspens (1939) caught my eye.  A member of the Taos Society of Artists, he was intrigued by the Taos lighting and color.  Something I find remarkable when I am in San Miguel de Allende shooting photos.  Alot to do with the similar altitude and lighting.  Hennings was tremedously influenced by the Art Noveau movement and Japanese wood block prints.

How Many Millions, One Can Only Guess (1905)
Newell Convers Wyeth
Wyeth had a great way with color and lighting.  This scene shows how the west was before the bison herds started to be killed off. 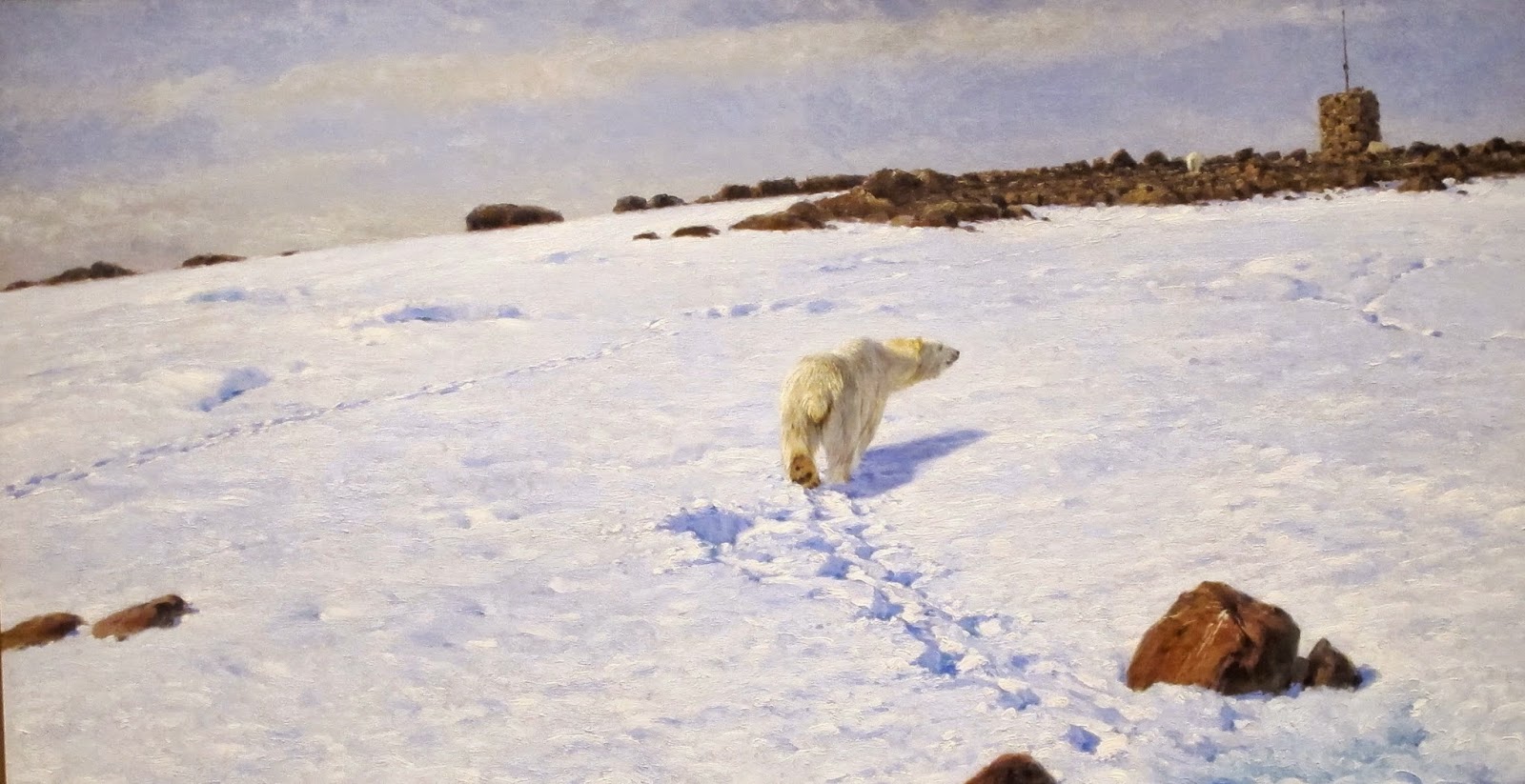 Arktikwanderer by Richard Freide - 1899.  This German artist was considered to be one of the best painters of Northern Europe and of Artic animals. 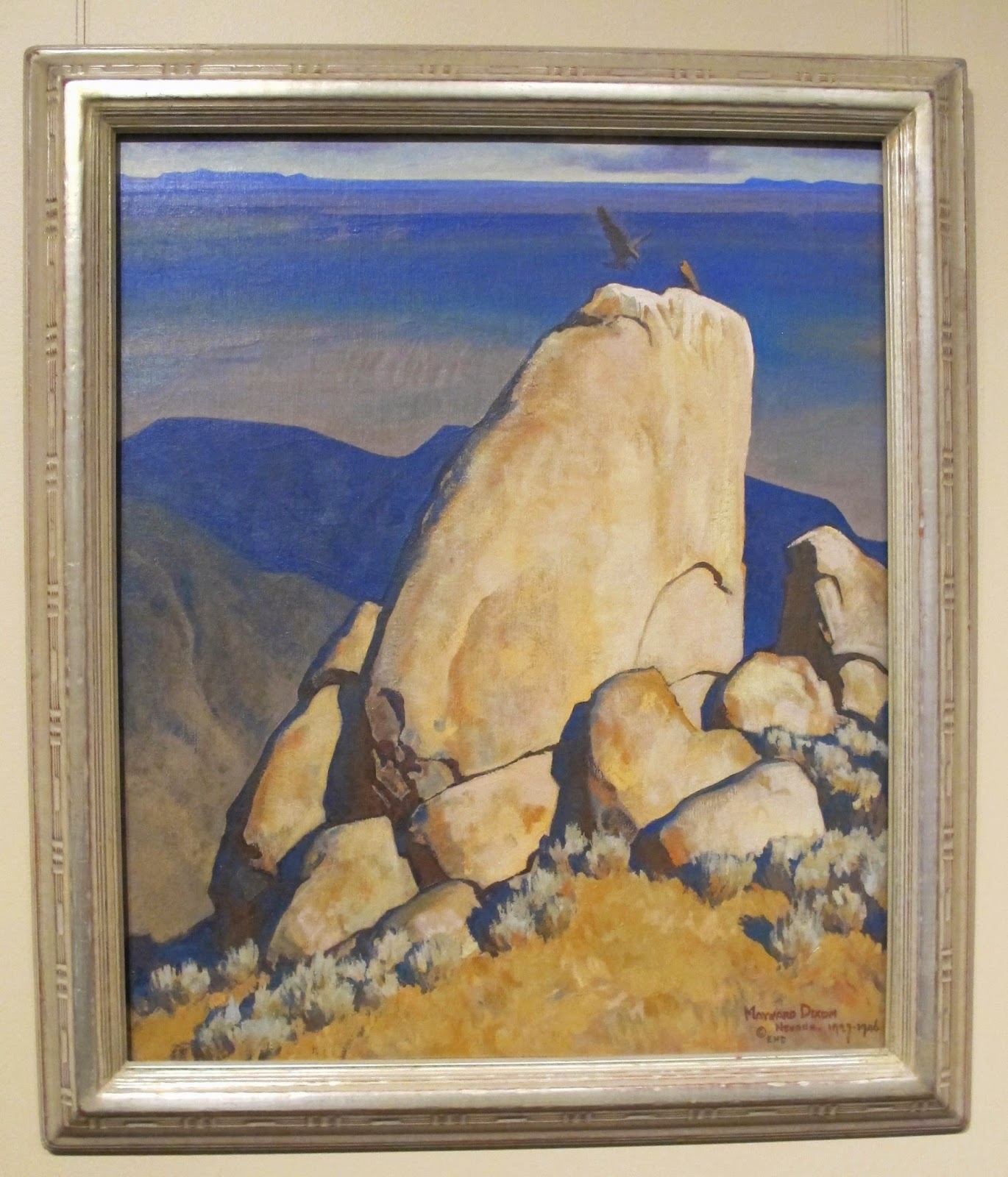 I am always amazed when I saw one of Maynard Dixon's paintings.  This Eagle's Nest is quite different from his other works.  At sixteen years old, he sent two sketchbooks to Fredric Remington to review.  It was Remington's encouragement that spurred the  beginning of Dixon's career. 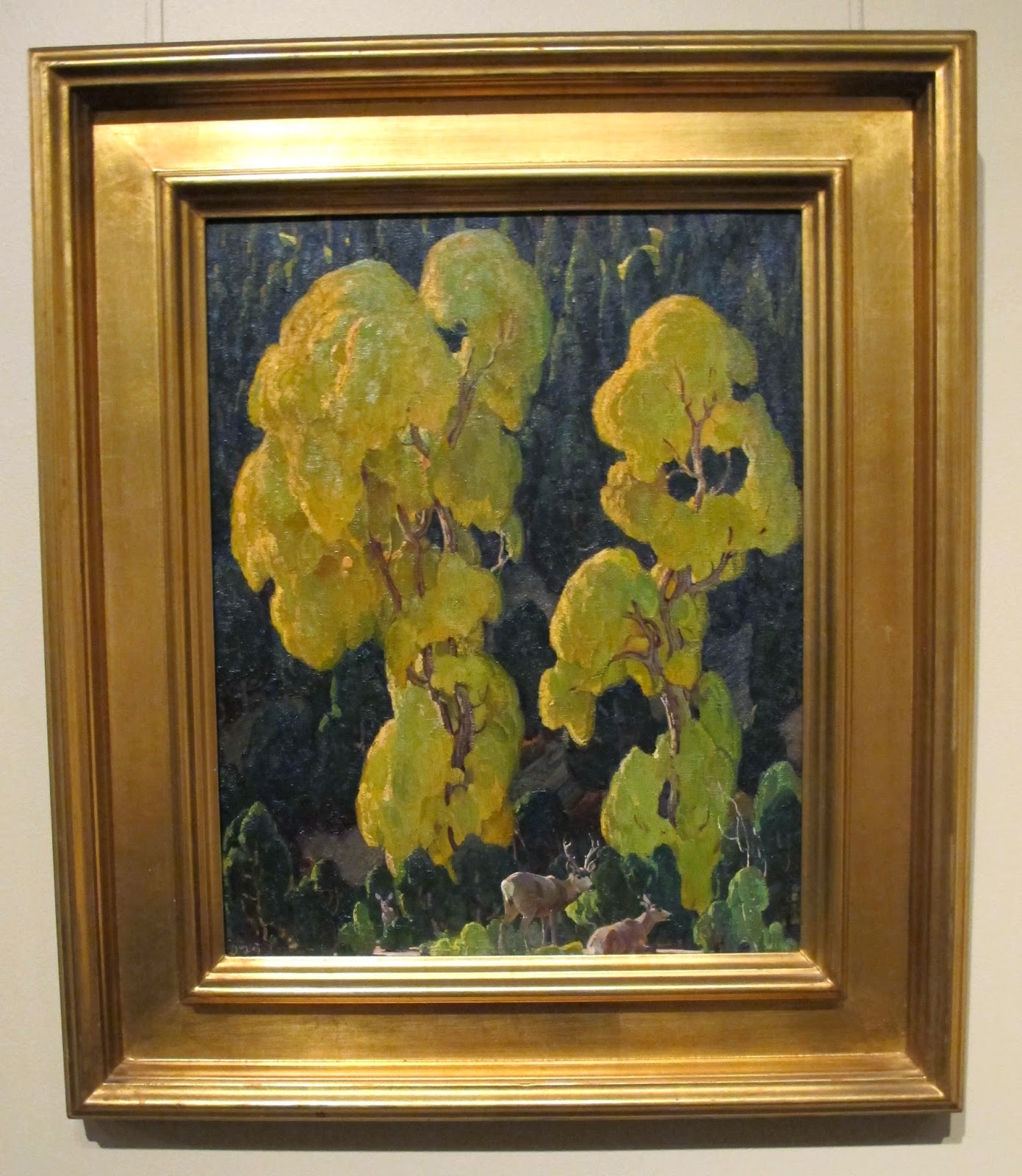 Tapestry of Autumn (1927) by William Herbert Dunton reminds me of the trees that are in the painting, Landscape with Indian Camp by Ernest L. Blumenschein (one of my all time favorite exhibits that I saw at both the Phoenix Art Museum and the Denver Art Museum in 2009).   Both artist were members of the Taos Society of Artists.   As a young man, Dunton was an illustrator in Maine for various papers and magazines.  His illustrations graced the covers of many of the Zane Grey adventures.  Later, he concentrated on paintings depicting the Old West. 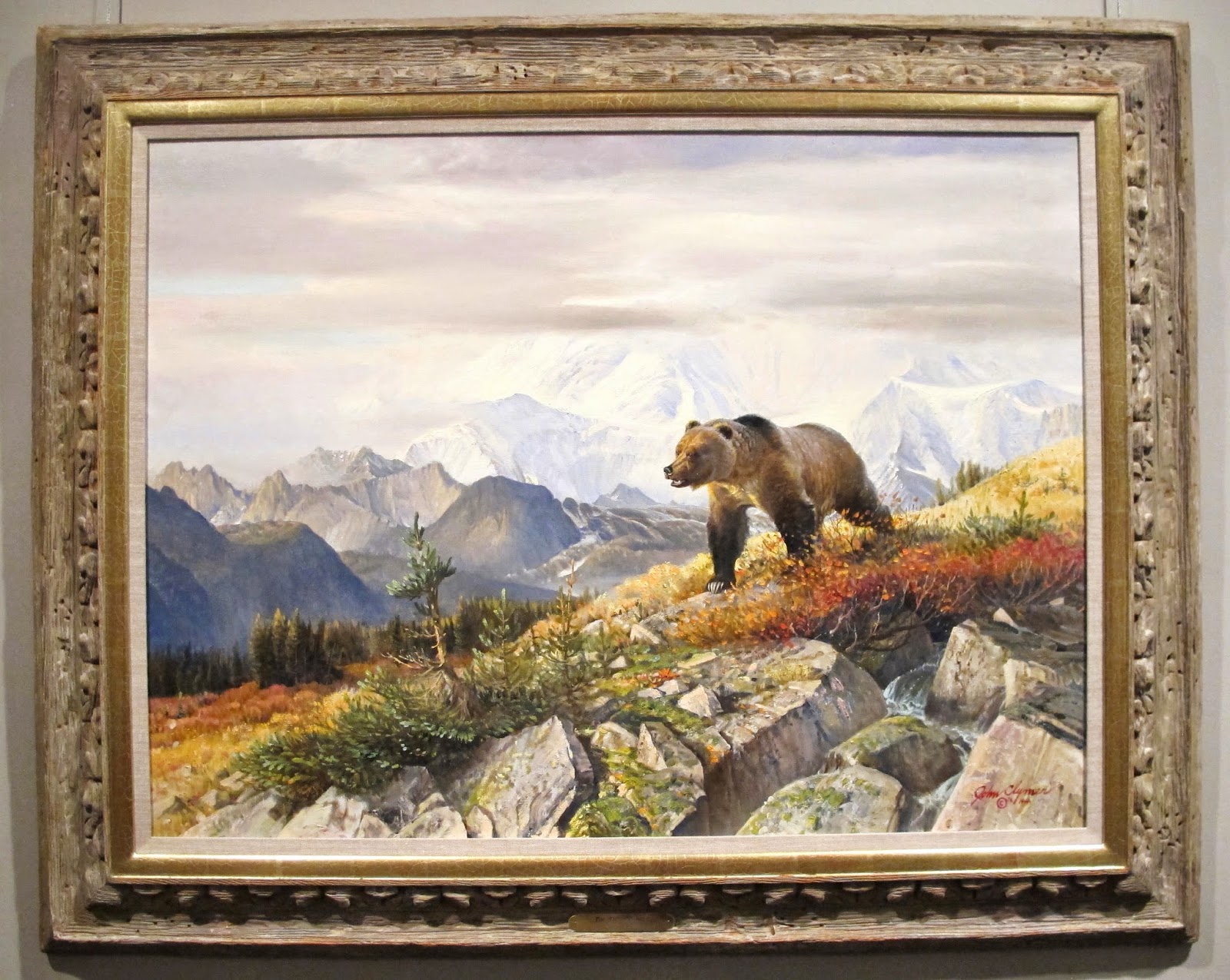 On The Prowl (1976) by John Clymer.  Clymer was born in Washington state in 1907 and at an early age, he loved to draw.  At the age of 16, he sold his first illustration to the Colt Firearms Company.  He lived in Canada and later back to the states to settle in Connecticut where his work appeared on many popular magazines.  He created over eighty covers for the Saturday Evening Post.
Even with his great success as an illustrator, he switched his focus to documenting the American frontier and enjoyed including animals in his scenes whenever possible.  He and his family eventually moved to Teton Village, Wyoming. 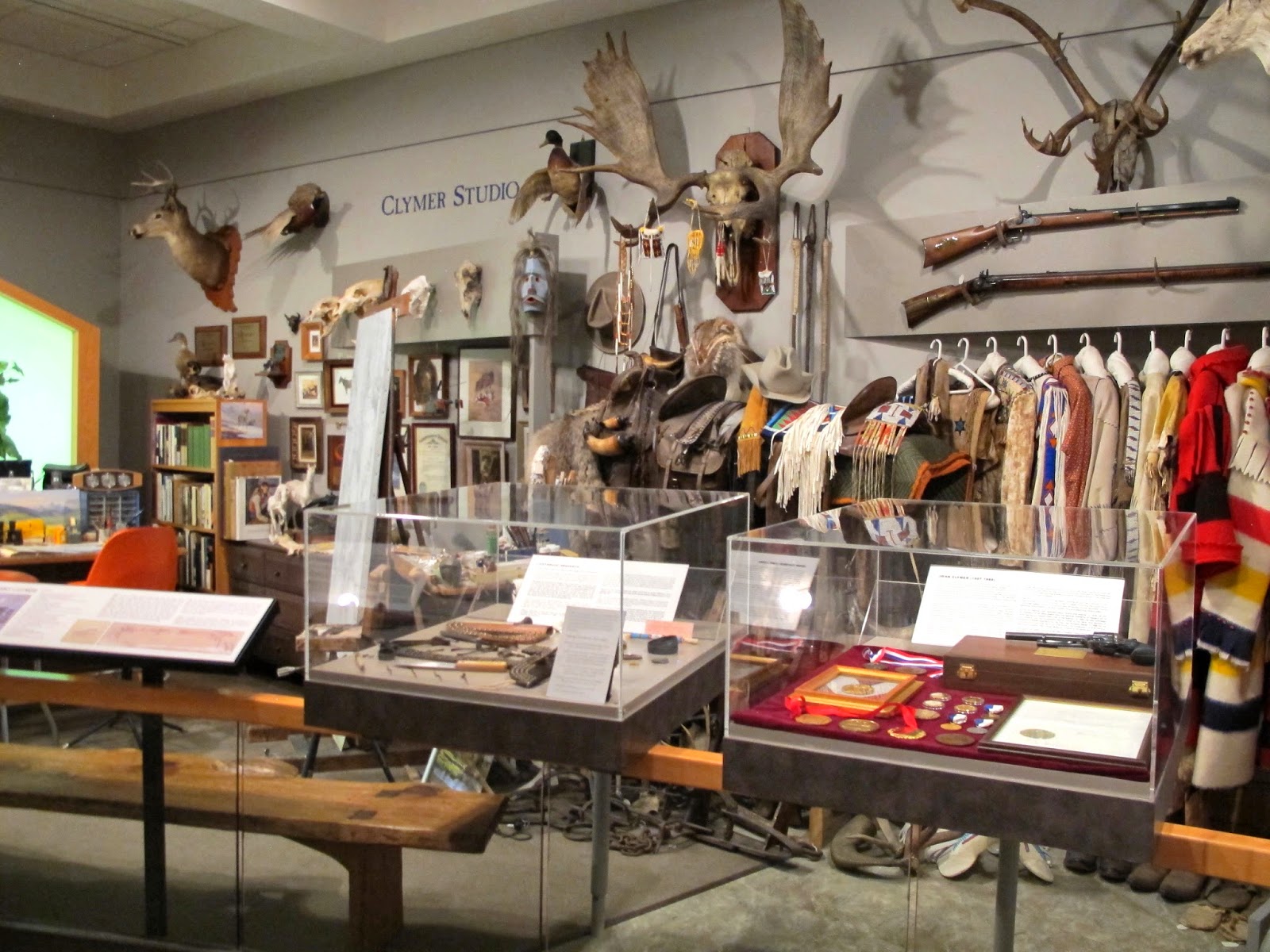 Clymer's studio in which the museum recreated; a donation from his family. 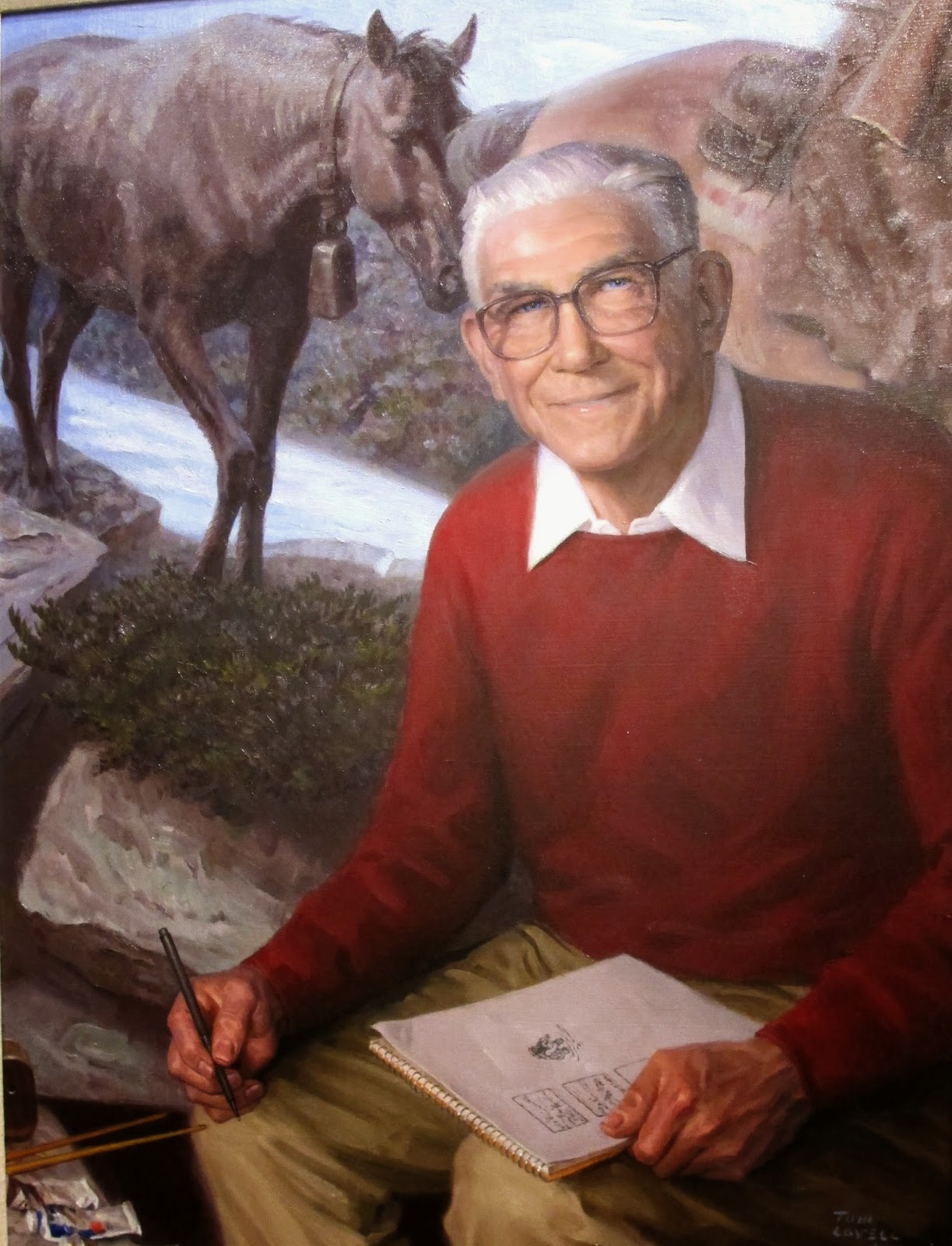 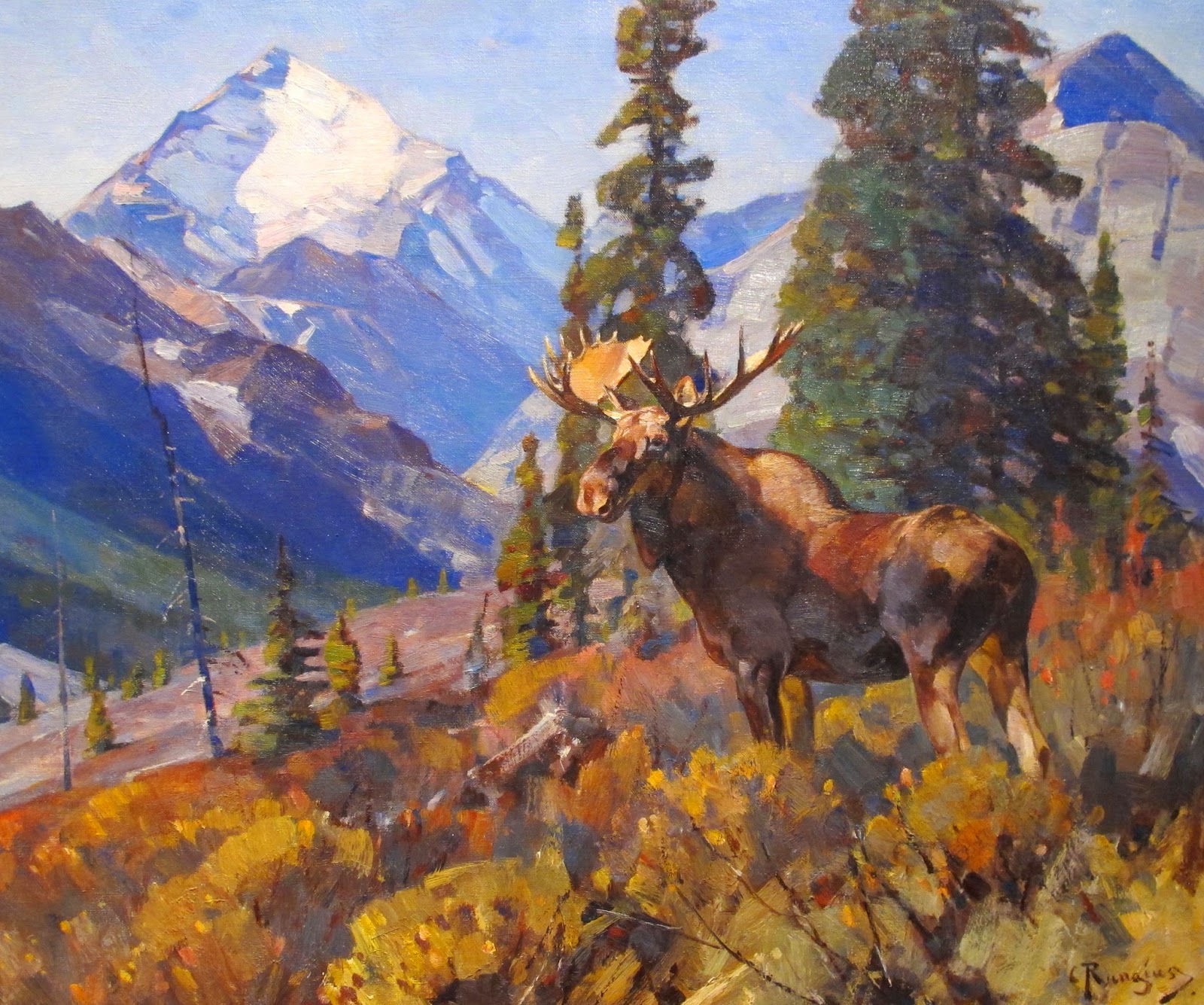 Bull Moose -  circa 1940
One gallery space has a series of Carl Rungius paintings that are all spectacular.  It was in the Ram and Clearwater River area near  Banff that he loved to paint.  Forest fires had made it perfect Moose country with its open range and fallen trees. 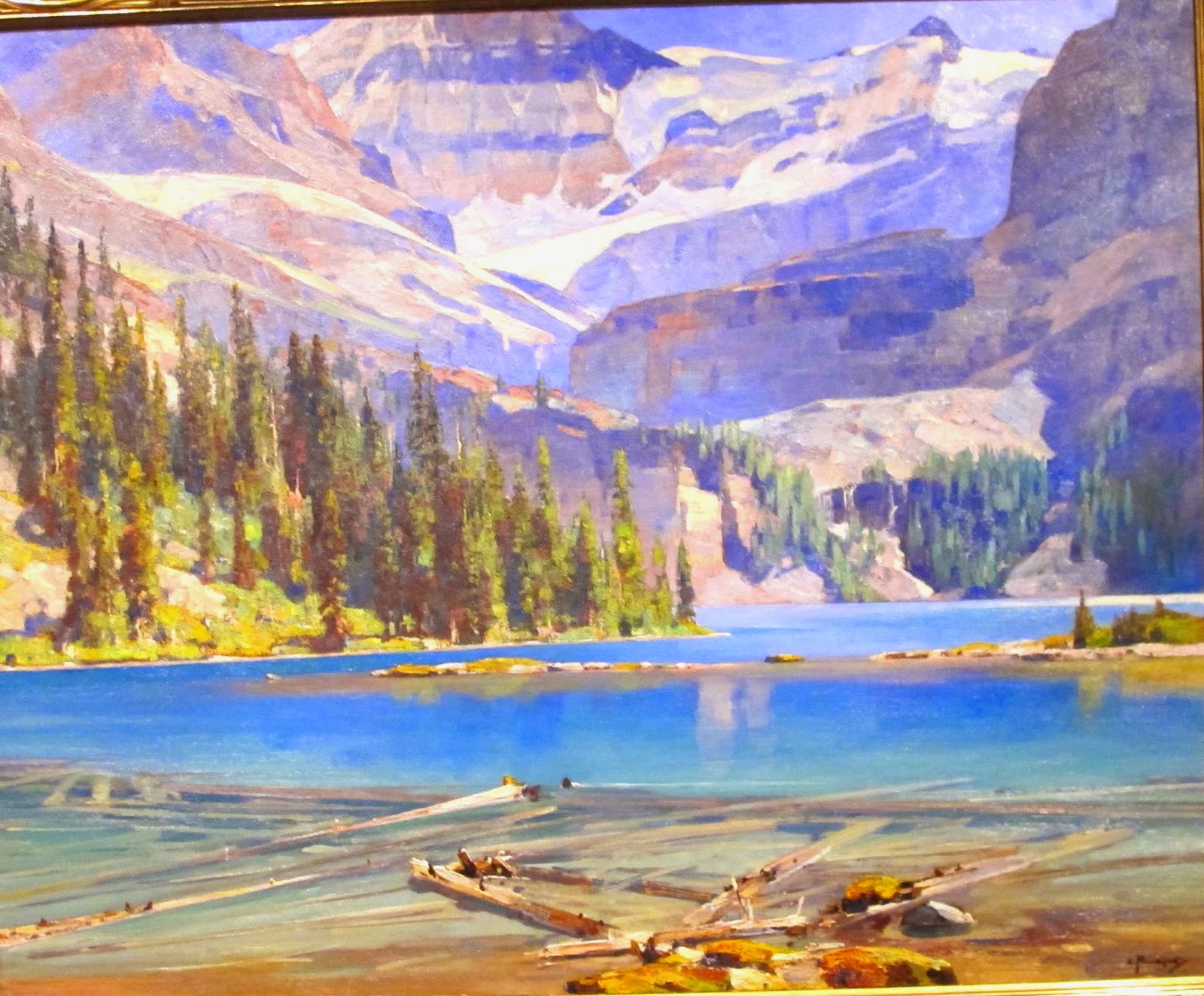 Lake O'Hara by Carl Rungius - 1935
I can just picture this crystal clear lake up in the mountains. 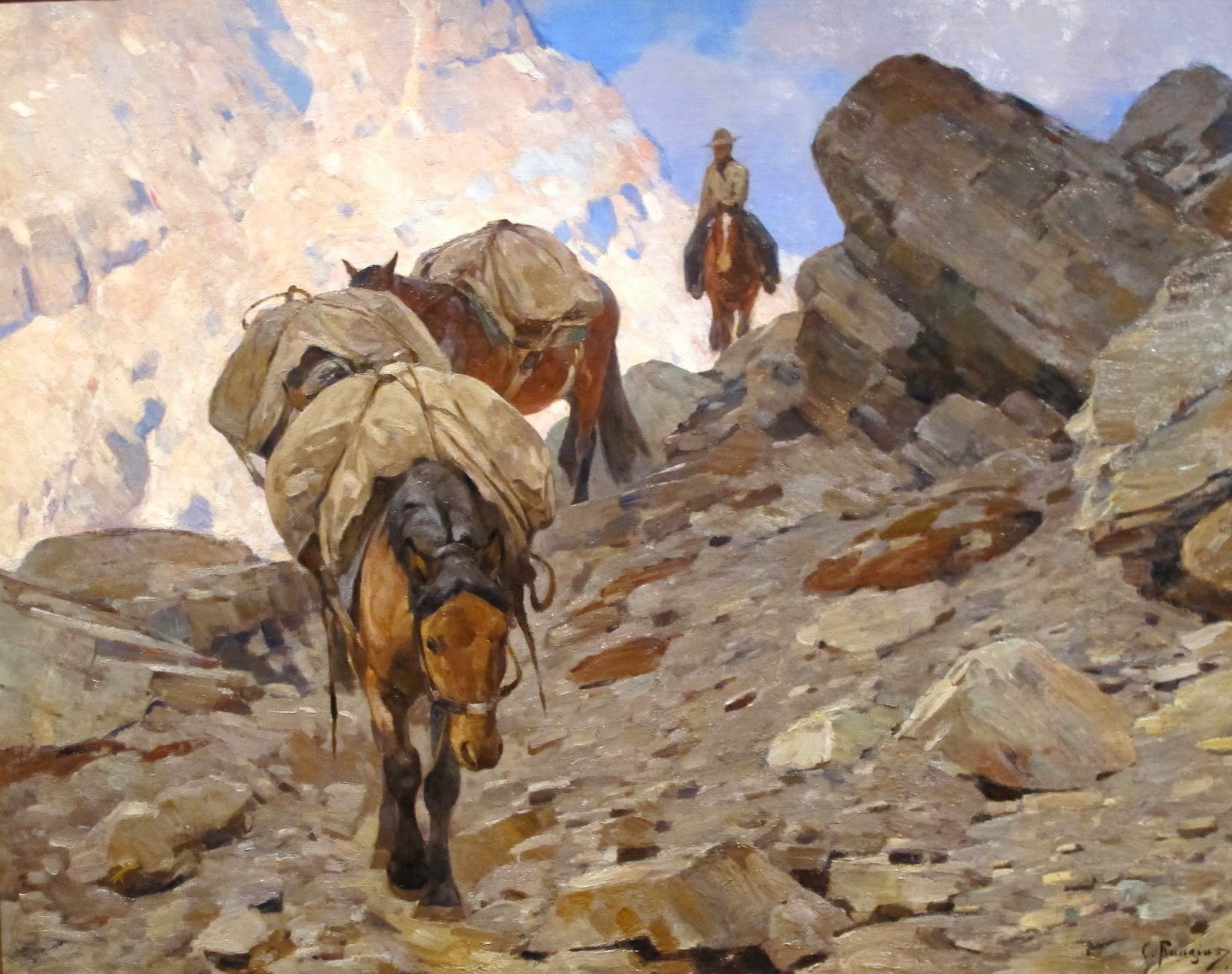 Pack Train by Carl Runguis - circa 1920
What a great scene set in Canada of the pack horse going over the rocky mountain pass. 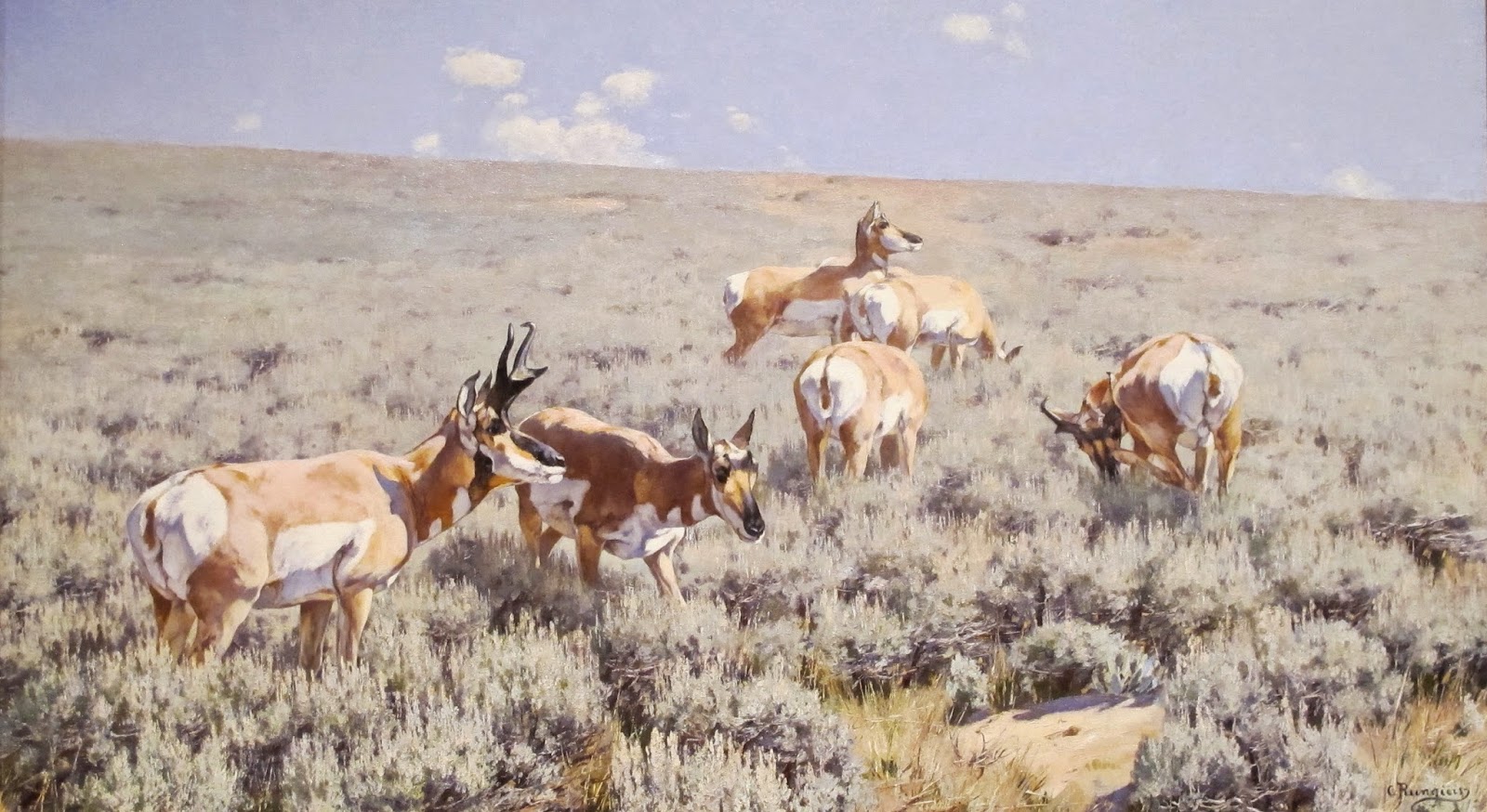 Wyoming Sage by Carl Rungius - 1902
If you have ever been in Wyoming and driving on one of those endless stretches of road, the terrain is full of the Sage bush and the strong morning and afternoon light makes the Sage come alive.  Then occasionally in the distance, you will spot a group of Pronghorn Antelope. 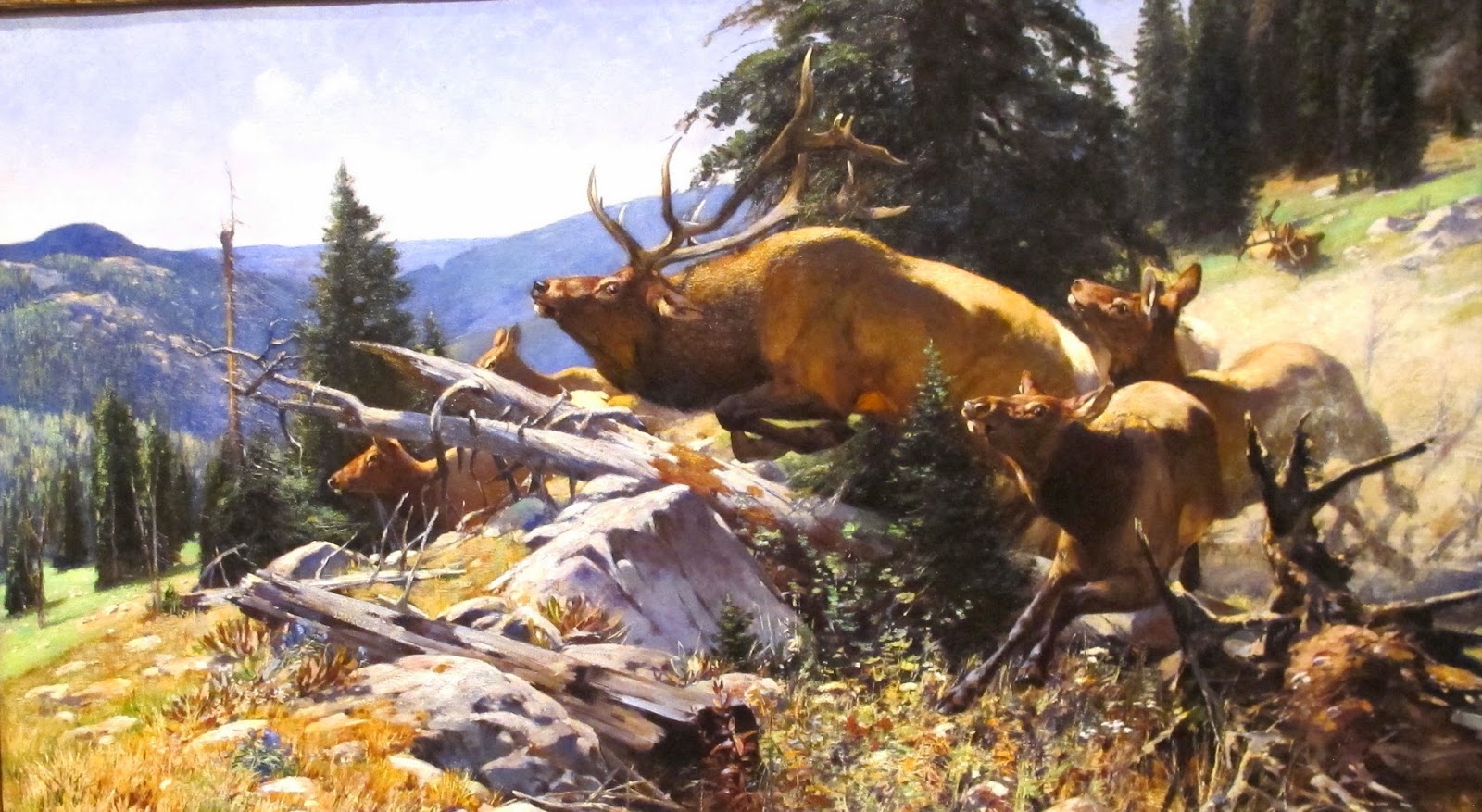 The Stampede by Carl Rungius - 1898
Rungius really captures the fear and panic in the elk as they are stampeding down the mountain side. Was it a bear or a hunter that caused the elk to flee so frantically?  These were some of my favorite painting by Rungius.

Email ThisBlogThis!Share to TwitterShare to FacebookShare to Pinterest
Labels: Jackson

National Museum of Wildlife Art in Jackson, Wyoming - Part I

Recently I was  visiting a friend who has a beautiful home outside of Jackson, Wyoming, right in the foothills of the Teton Mountains.  I was very impressed with the National Museum of Wildlife Art located just north of town.  The building is constructed of field stone which magnificently sets right into the sage covered hillside. 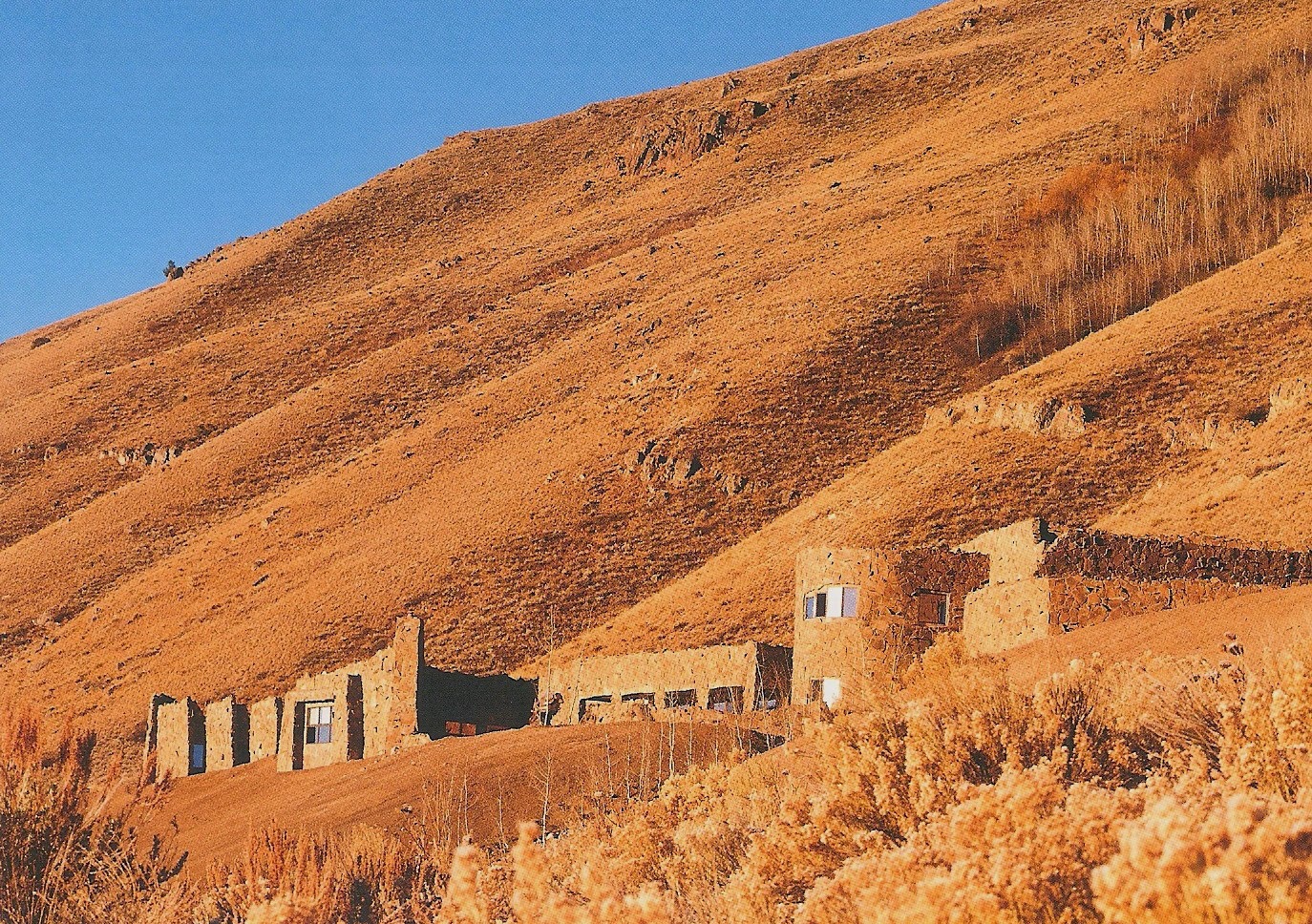 The museum features more than 550 artists, dating from 2500 B.C. to the present.  The work represents the history of wildlife in art, focusing primarily on European and American painting and sculpture with a strong representation the 19th and 20th century.  Many of these works predate photography, making them especially important in recording the history of the frontier era in the United States 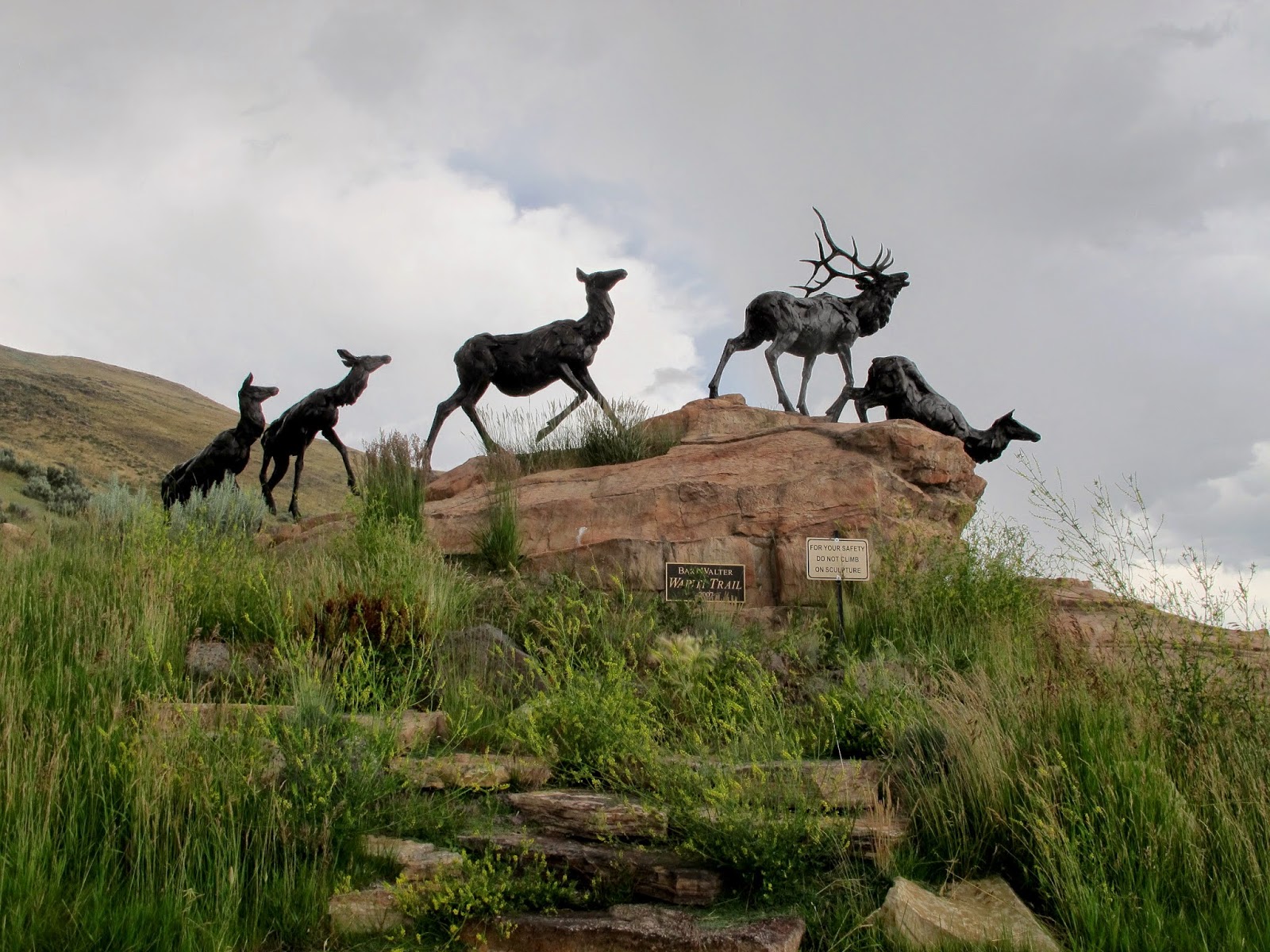 There is a 3/4 mile long sculpture trail with 30 bronze sculptures. 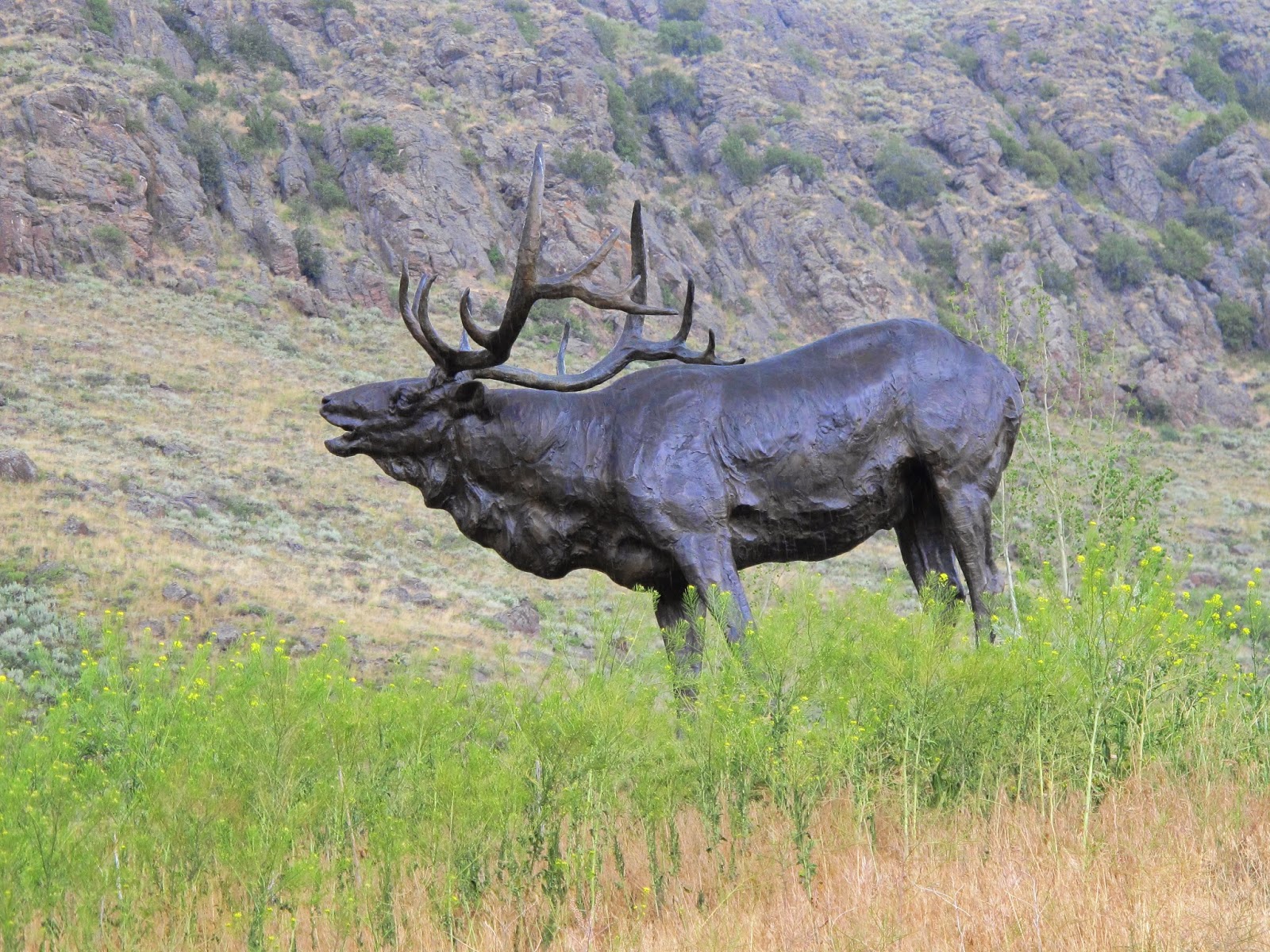 I can just hear the bellowing call of this elk! 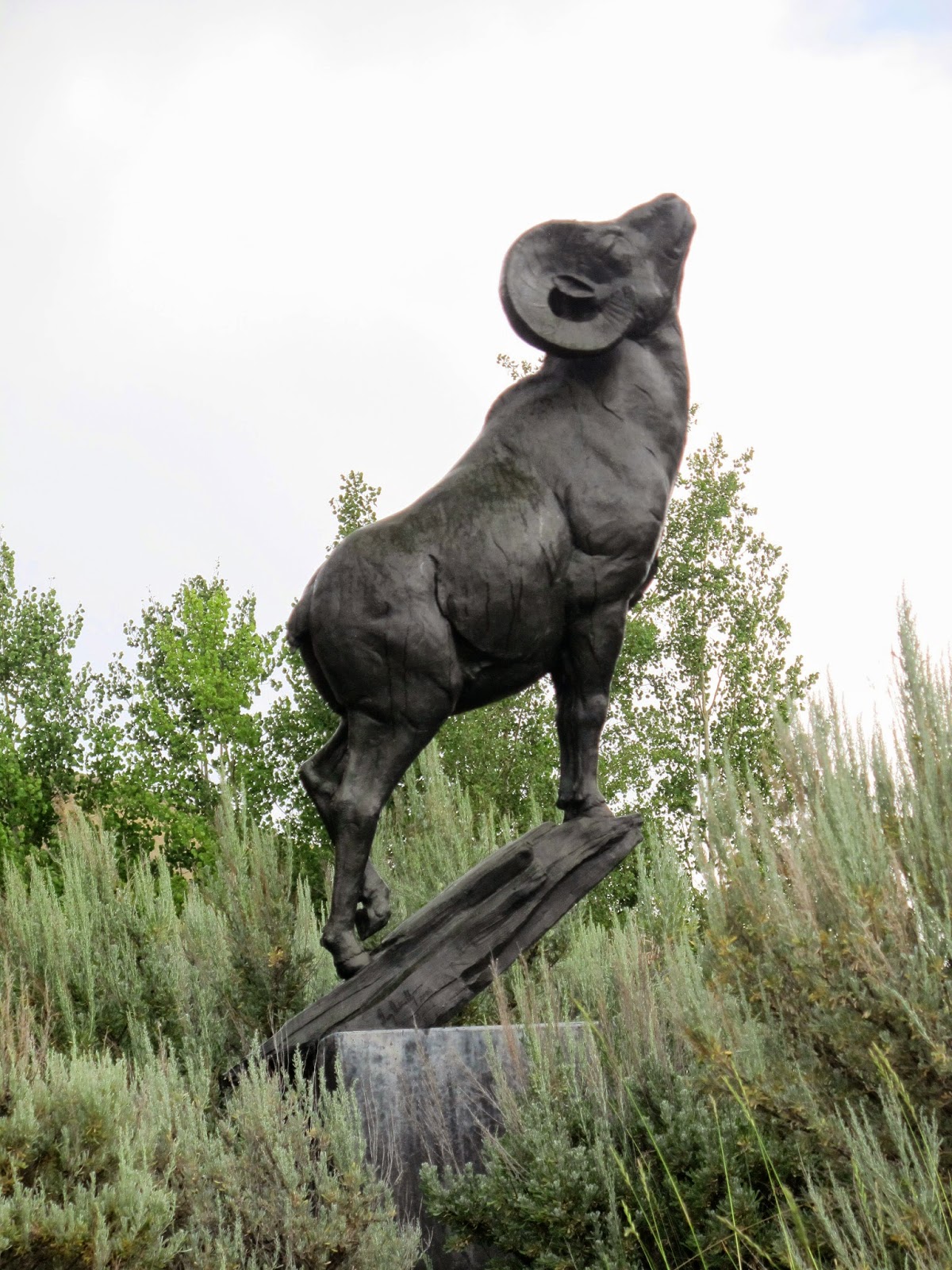 So majestic, Emperor by Dan Ostermiller totally nailed it with the poise of this ram. 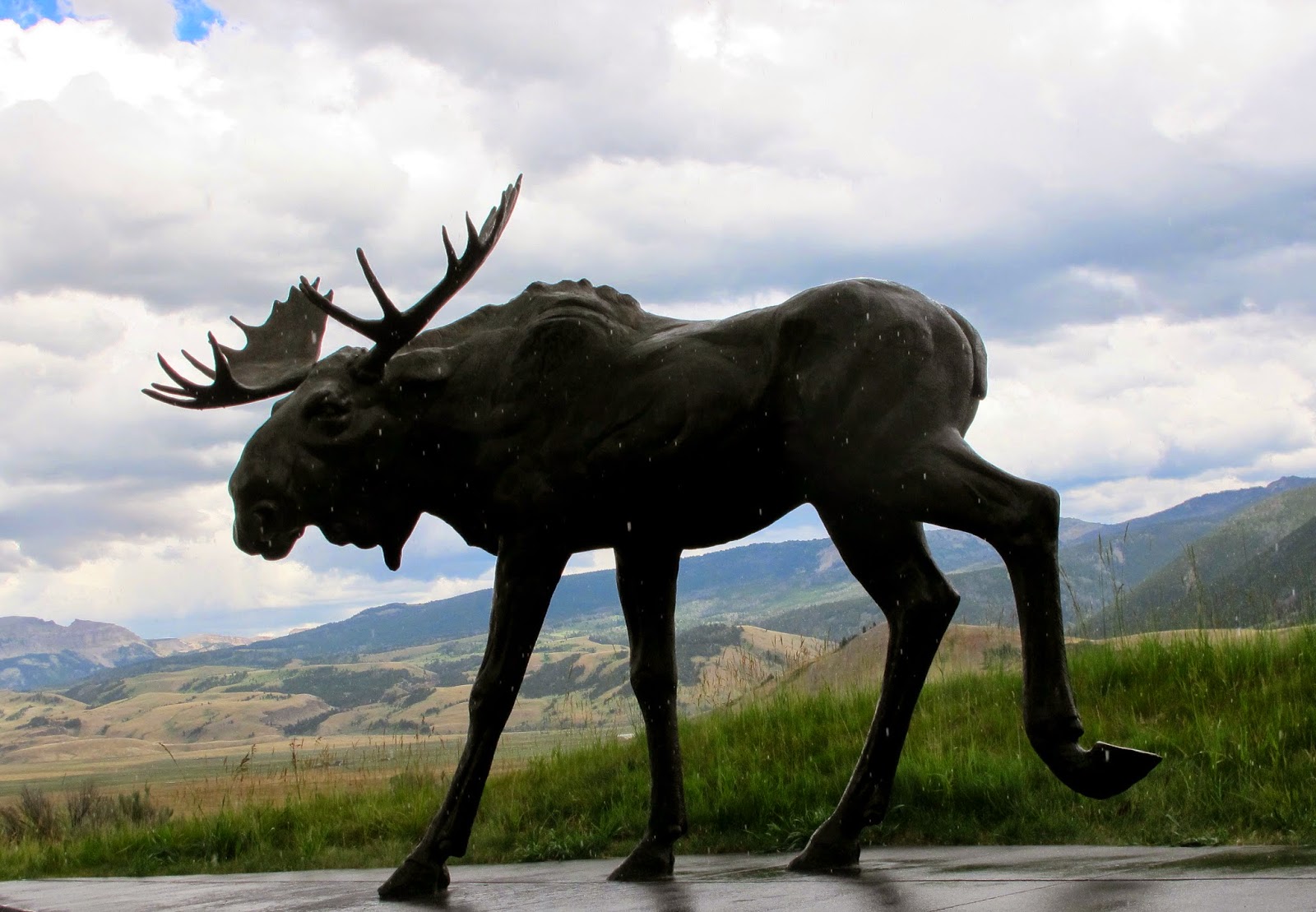 I just love how Sandy Scotts captured the lumbering walk of the Moose. 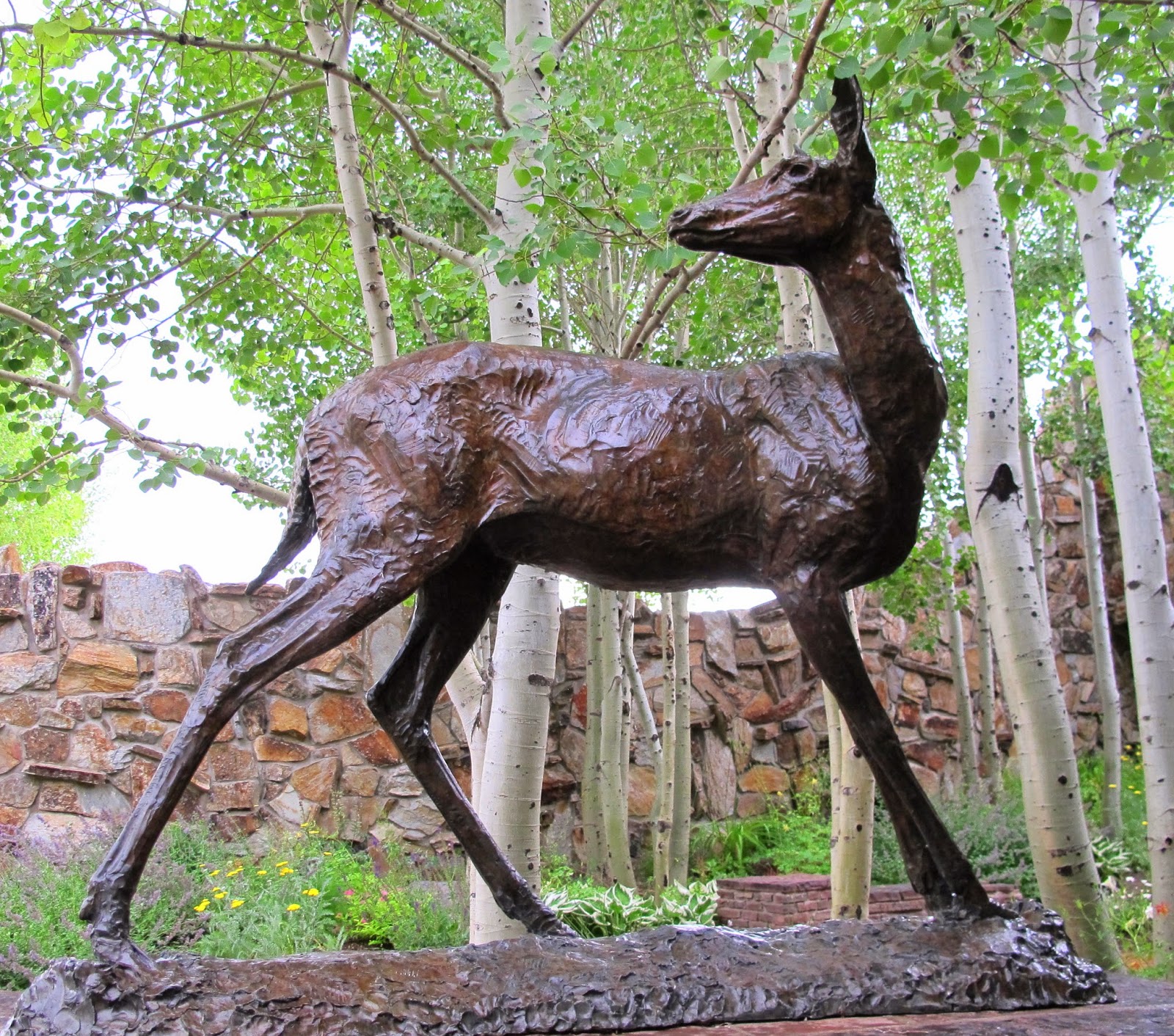 Whitetail Doe Looking Back by Kenneth R. Bunn is certainly graceful.  It was raining pretty hard so we did not walk the whole loop.  The sculptures really do come to life in this beautiful setting.

Posted by Robin Mullen at 6:00 AM 1 comments