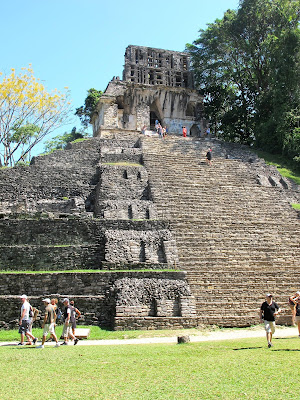 Past the Temple of the Inscriptions and across a small stream, a trail and some steps leads you into the large courtyard of the South Group, also known as the Grupo de la Cruz (Group of the Cross).  The group consists of three temples, all dedicated to Chan-Bahlum.  There are many inscriptions depicting the transfer of power to Chan-Bahlum from Pakal.  Interesting that Chan-Bahlum had a special deformity, six toes on each foot and six fingers on his left hand (a condition called polydactyly).  He is depicted on several other buildings as a baby, recognizable by his six-toed feet.
Even though Pakal had planned his own tomb, it was Chan-Bahlum who completed the Temple of the Inscriptions.
Above is the largest of the temples, the Temple of the Cross, with its nine levels and crowned with a grand roof comb. 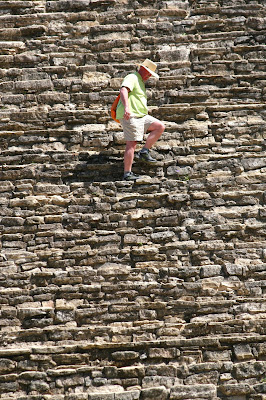 I had to laugh, us adults were very careful in climbing up and coming down those steep, narrow steps.  Len taking side stepping. 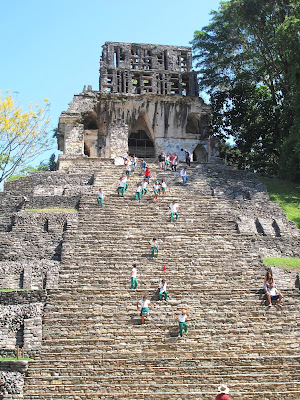 Then a school group of about 15, dressed in white shirts and green pants, came down those stairs two at a time like grease lightening. 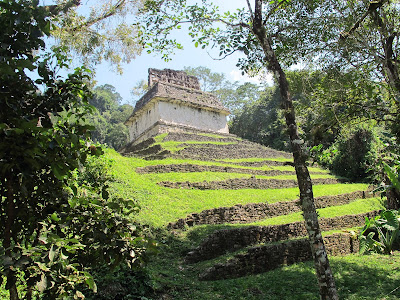 Looking up at the back side of the Temple of the Cross. 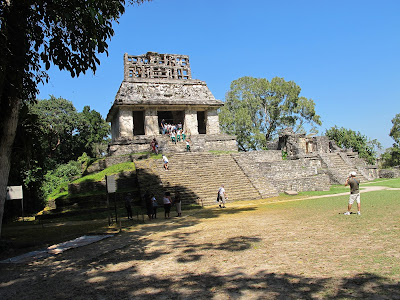 The Temple of the Sun 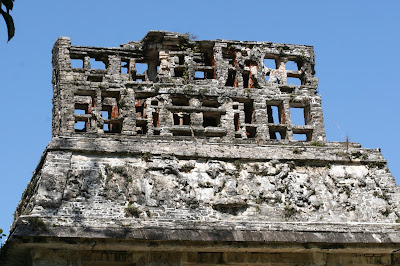 with the best-preserved roof comb at Palenque. 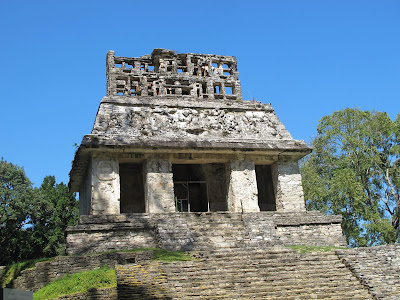 There are inscriptions dating from 642 with scenes of offerings to Pakal, the sun-shield King. 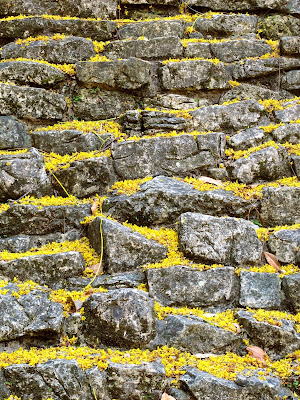 Nature's art!  I just loved how the blossoms from the trees fell in between the rocks. 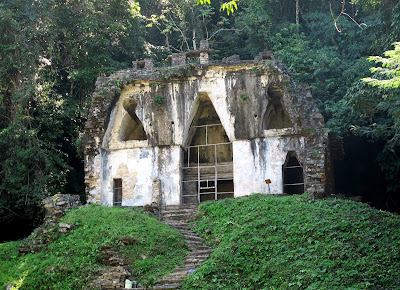 On the Templo de la Cruz Foliada (Temple of the Foliated Cross), the arches are totally exposed which reveals how the architect's of Palenque designed these buildings.  Unfortunately this we could not climb up to the entrance of this temple.  Inside there is a well-preserved tablet showing Pakal with a sun shield engraved on his chest, corn leaves (hence the name of the temple) growing from his shoulder blades and the Quetzal bird atop his head.


As you can see, it is easy to spend an entire day here!
Posted by Robin Mullen at 6:00 AM 0 comments

Back to Palenque and The Temple of the Inscriptions

Palenque is one of my all time favorite Maya sites. 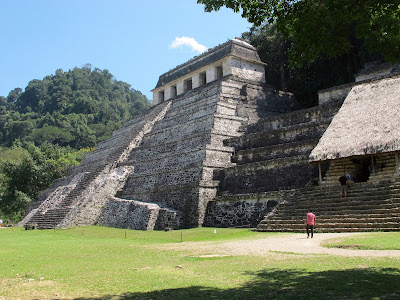 The Temple of the Inscriptions, in the ancient Maya city of Palenque.
The city was named after a Maya king, Pakal, founded about 225 BC and inhabited until 850 AD.  That was 1,075 years! 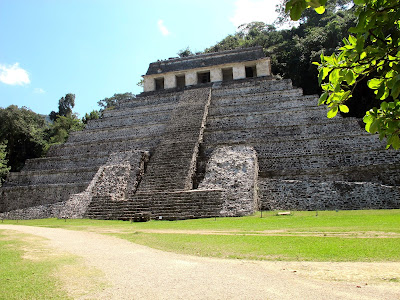 To put a little perspective on that time frame, Columbus "discovered" the new world in 1492, 642 years after Palenque was abandoned. 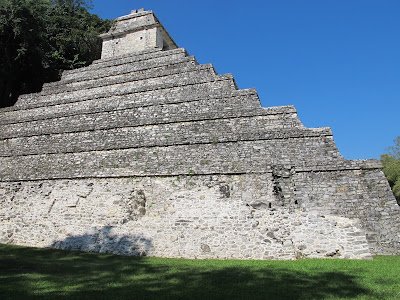 It was a gorgeous day and not too hot or crowded.  Encountered a few Portuguese, Italian and French tourist. 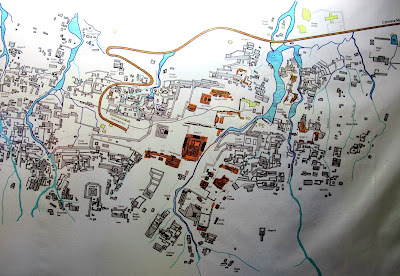 The estimate is that the city of Palenque has over 1,100 buildings built without metal tools, pack animals or the wheel.  Less than 10% has been excavated or explored:  The buildings highlighted in orange on the map above are those that have been excavated.
Imagine as you explore the ruins, the gray stone buildings at one time were stuccoed over and painted red.
Interesting background on Palenque and its explorers....
It has been written that Hernan Cortes came within 40 kilometers of Palenque, never knowing of its existence.
In the 1770's, Maya hunters told two Spanish priests that stone palaces were within the area.  The priests led an expedition to Palenque where they wrote a book claiming it was a capital of an Atlantis-type civilization.
Captain Antonio del Rio led an expedition in 1787 to Palenque.  For some reason, his report was locked up in the Guatemalan archives.  A British resident of Guatemala translated the report and it was published in England in 1822. (Note: this was the period that Chiapas broke from Guatemala and became part of Mexico).  This publication spurred on expeditions to seek out this exotic, hidden city.
One explorer being Count de Waldeck who lived atop one of the pyramids  from 1831 - 1833 where he wrote a book mystifying the site as the lost Atlantis and Palenque's fame grew in Europe.
But it was not until John Stephens along with artist Frederick Catherwood arrived on the scene in 1837 when he wrote about the six pyramids they started to excavate and the remarkable aqueduct system.  This paved the way for future archeologist. 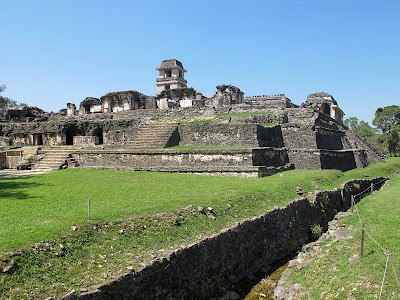 The aqueduct shown in the photo above along with the magnificent Palace which dominates the center of the site. See below, it is right above the Temple of the Inscriptions. 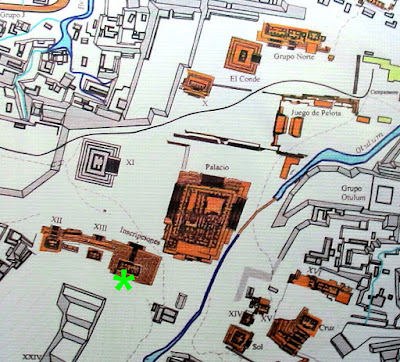 The Temple of the Inscriptions is marked on the map above with a bright green star.
Pakal was buried in a tomb, within the Temple.  There are 68 steps that lead down into his tomb, each step representing each year of his reign. The tomb was discovered, intact in 1952. 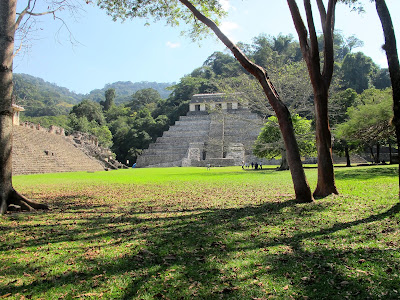 The Temple of the Inscriptions (House of the Nine Sharpened Spears) is 79-feet-high and Palenque's most famous structure.   The structure consists of a "temple" structure that sits atop an eight-stepped pyramid (for a total of nine levels). The five entrances are surrounded by piers with carved images and the hieroglyphic texts in Mayan for which the temple was named.  Inside the temple, a stairway leads to the crypt containing the sarcophagus of Pakal. 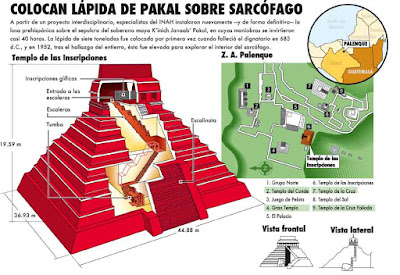 A drawing showing the stairway that leads down to the crypt.

This secret stairway, discovered in 1949 by Mexican archeologist Alberto Ruz L'Huillier, was originally hidden under a stone slab.  The stairs were intentionally jammed with rubble to prevent access to the tomb.  It took three years to excavate until Pakal's tomb was revealed.

The lid, alone, for the King's sarcophagus is 7' x 12', 9" to 11.5" thick, depending on the thickness of the decorative carvings and weighs 7 tons. It is believed that the tomb was built first and the temple around it.  It wasn't until a few years ago, one was allowed to enter the tomb. 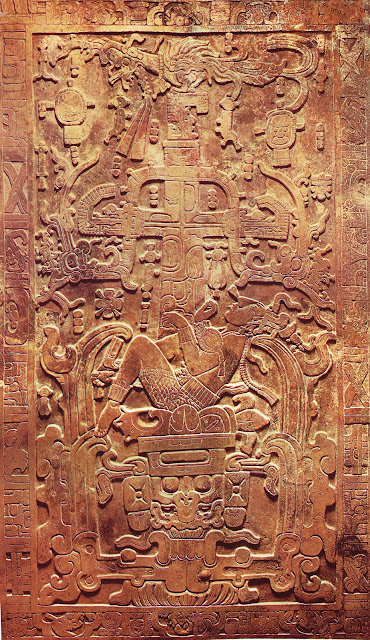 Pakal's sarcophagus is on view at the Museo Nacional de  Antropología in Mexico City.   On the lid is an image of Pakal on top of "earth monster".  Below him are the open jaws of a jaguar.  Above him is the Celestial bird, perched atop the Cosmic Tree (represented by a cross) which holds a serpent in its branches.  Pakal lies between two worlds, the heavens and the underworld.  Beneath the crypt is a snake-like hollow ventilation tube connecting Pakal to the realm of the living. 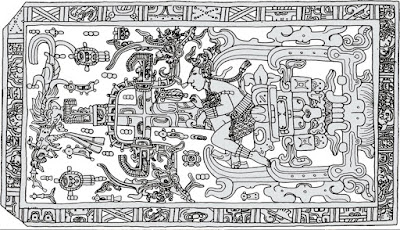 Also on the sarcophagus are Pakal's ancestors, going back six generations.

Pakal’s death mask was made entirely of jade, while the eyes made of shells, mother of pearl, and obsidian.
Pakal accended to the throne in July of 615 and ruled 68 years until his death at the age of 80!  His 68 year reign is among the 30th longest worldwide.  He was responsible for the construction of some of Palenque's most notable surviving inscriptions and monumental architecture.
On Christmas Eve, 24 December 1984, 124 artifacts were stolen from the Museo Nacional de Antropología in Mexico City.  One being the death mask of Pakal. June of 1989, Pakal's death mask and 110 other artifacts were recovered.

Palenque and the setting is breathtaking and one not to be missed!

I am putting together another tour to Chiapas next year around the same time, February 9 - 17, 2018.  I have added an extra day in San Cristobal de las Casas because there is so much to see and I have made sure that we will be visiting San Juan Chamula during Carnival which is a very special time and something you will never have witnessed before!

Let me know if you are interested in joining me.
It's a small group so plan ahead.
robindsg@aol.com