Travel the Ages... From the colonial town of Puebla to the lavish culture of Mexico City

I have put together a phenomenal nine day guided tour
Puebla City and Mexico City.
October 9 - 18, 2020

For those who have been on my San Miguel de Allende tours, my Artisan and Architecture tour in the state of Michoacan, Oaxaca tour and exploring the Magic of the Maya World in Chiapas, I know if you join me, Puebla and Mexico City will also capture your heart.
Helping me on this tour is Rick Hall.  Rick has helped me with a few of my previous tours and he was recently selected by the Mexican Cultural Institute of Artisans to be a judge at all the expositions in the state of Michoacan in 2020!  He is a perfect choice for this honor for he has worked directly with numerous artisans in central Mexico over the past 40 years and his personal folk art collection is museum quality.  Rick helped me with my last tour to Mexico City and his knowledge of the history, artisans, the city, etc., was remarkable!
The first part of the tour starts in Puebla.  You will fly directly from Denver to Houston and then on to Puebla.  Rick and I will meet you at the airport where we will be escorted to our hotel right in the historic center of town.  Once checked in, we will walk a few blocks to the zolcalo, the main square, for a light dinner under the portales. 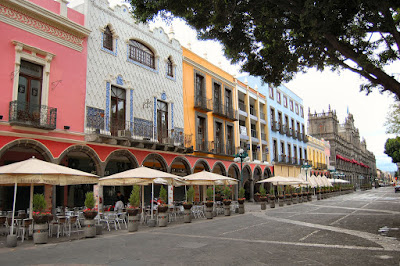 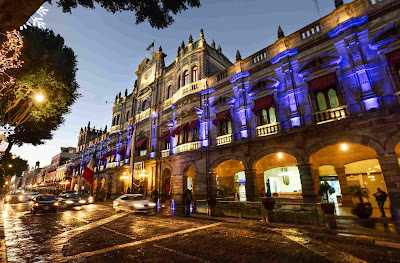 which is bordered on three sides by the original broad stone arcaded buildings (called portales). 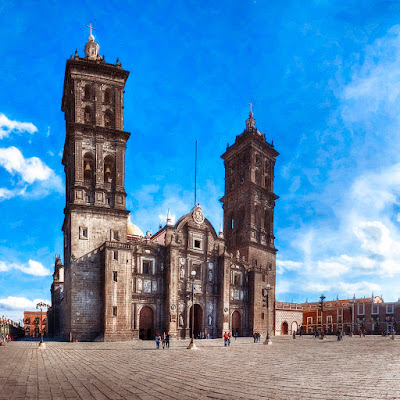 and on the south side is the Cathedral.  The Cathedral, considered by many as one of the most beautiful in all of Mexico, was completed in 1648 with bells only in one tower with one bell weighing 8.5 tons. 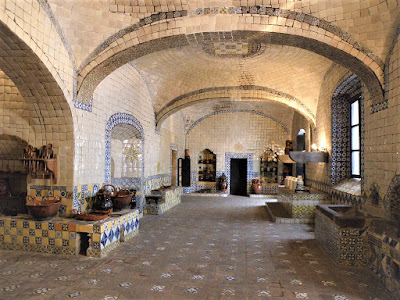 A visit to the Ex-Convento Santa Rosa, converted into a museum to display crafts produced in the state of Puebla.  The above is the former kitchen at the convent constructed with talavera tiles filled with huge caldrons and other earthenware utensils.  It is legend that the Dominican nun, Sor Andrea d la Asuncion, created the famous Mole Poblano. 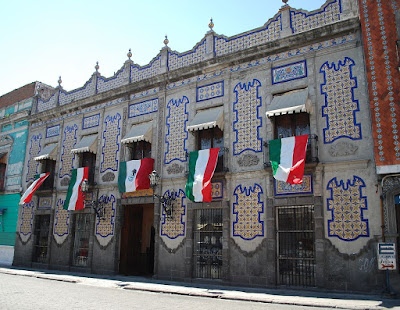 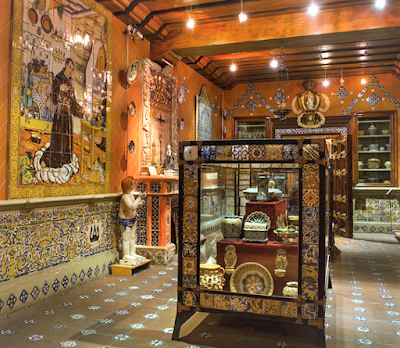 A stop at the Museo Bello with its eclectic collection of over 2,500 pieces of furniture, decorative arts, talavera pottery all collected by Mariano Bello, a 19th century industrialist who owned cigar and textile factories. 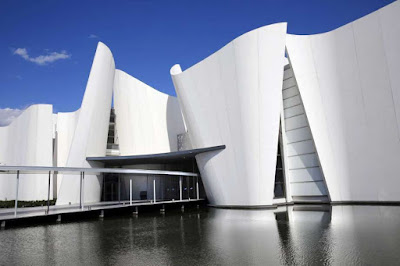 Tour the International Museum of the Baroque designed by Japanese architect Toyoo Ho followed by lunch in the museum's Restaurant Barroca.  Visits to the Museo Casa del Dean, a Renaissance-style home built in 1580 with phenomenal antique frescoes.   A stop at the Casa de Cultura, formerly the archbishop's palace with a facade adorned of bricks and tile.  Up a flight of marble steps to the second floor, you will encounter  the Biblioteca Palafoxiana, the oldest library in the Americas. 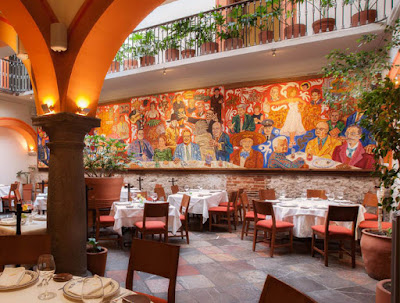 Dining in Puebla is some of the best.  One night we will dine at El Mural de Los Poblano, shown above.  Another night, at a private home owned by Pueblo's top antique dealers.  Lunch one day in the Cinco de Mayo Market.  And much more... 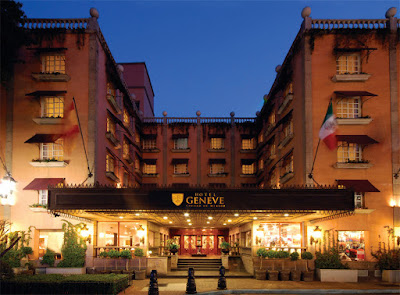 Our private van and driver will pick us up at our hotel in Puebla and we will be chauffeured to an old gem of a hotel, Hotel Geneve, right in the heart of the historic center of Mexico City. 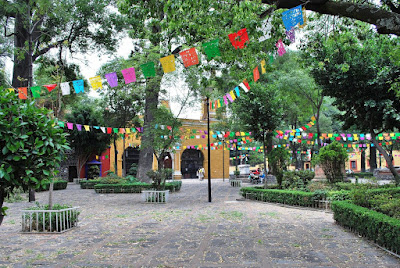 Arriving into Mexico City just in time for comida (lunch) where we dine in a funky cantina right in the center of the charming colonial Coyoacan district. 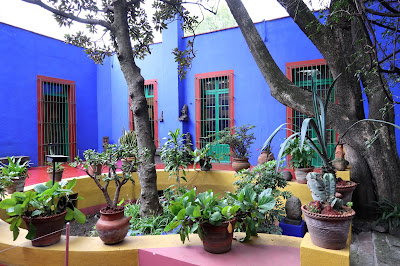 After comida, we will immerse ourselves into the world of Frida Kahlo when we tour Casa Azul, Frida's gardens, studio and home. 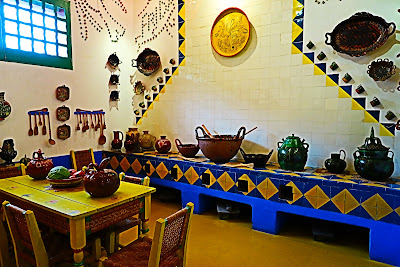 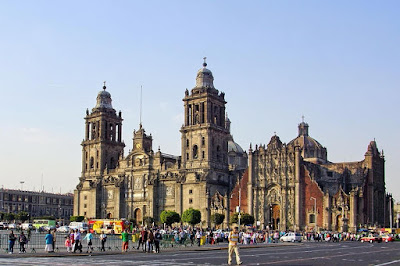 Another morning at the Plaza de la Constitucion, invariably known as the Zocalo, one of the biggest public squares in the world.  We will visit the National Cathedral, one of the greatest religious structures in Latin America, 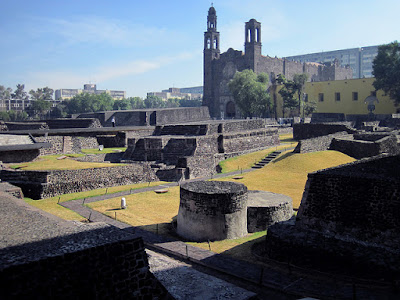 and the Templo Mayer, the site of the Aztec teocalli (sacred city). 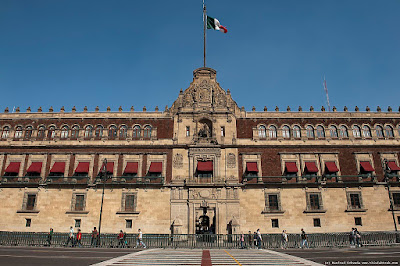 A visit to the National Palace, the former site of Hernan Cortes’ residence. 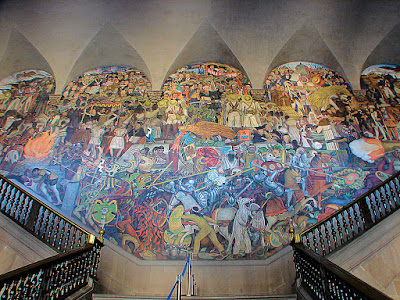 The most interesting feature of this Renaissance building is the great mural by Diego Rivera depicting the history of Mexico along with countless other murals on the second floor. 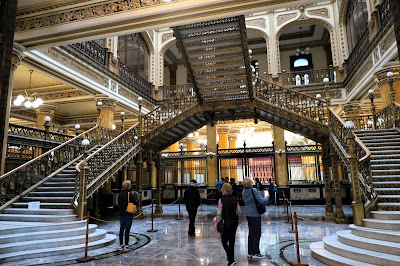 A stop at the Palacio de Correos de Mexico (the central post office) built in 1907 is quite spectacular with its eclectic architectural styles.  Pretty amazing. 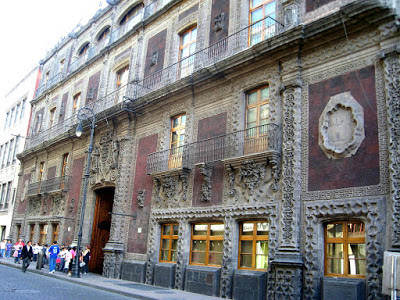 The Palacio de Iturbide is one of the best colonial, Baroque buildings in the city.  Built around 1780, it was once the home of Augustin de Iturbide, the first emperor to Mexico after Mexico's independence from Spain.  Later it was a convent, a college and then a hotel before Banamex purchased it.  It re-opened as the “Palacio de Cultura Banamex” and today it hosts numerous temporary art exhibitions, as well as art workshops for adults and children.  The last exhibition was out of this world, who knows what will be in store for us next October. 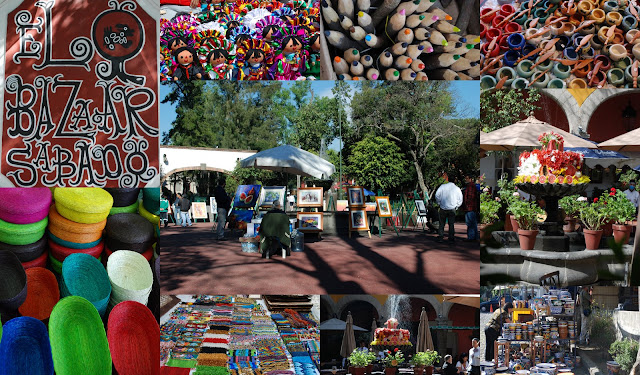 Another morning we will start at the Museo de Culturas Populares, which has excellent temporary exhibits on Mexican culture and artists.  Comida at one of my favorite places, Los Danzantes, in the San Angel area.  After we will have plenty of time to explore the famous Bazar Sabado, an artisan market that comes to life every Saturday filled with stalls after stalls of handmade jewelry, textiles, crafts... 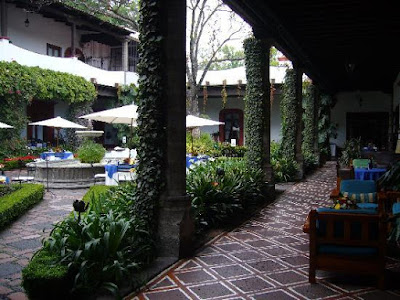 Later we will have a leisurely dinner at the San Angel Inn.  The San Angel Inn is a long-standing, venerable institution in Mexico City.  Set in a classic, old hacienda (originally a convent), the atmosphere is elegant with blue-and-white Talavera-style place settings and bright white table linens—it has a true Spanish-Mexican colonial feel and is an oasis of calm in the middle of city.  A special place I have been coming to for over 40 years. 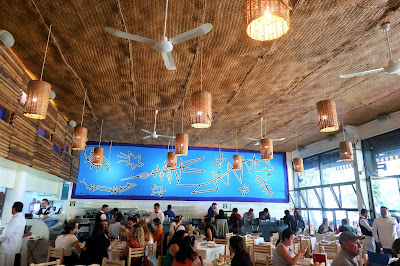 Comida one day at Contramar, famous for their fish and the decor is spectacular.  I love the brilliant blue wall along with the ceiling being covered in the Mexican straw mats, los petates.  It's a popular place.  Author and Chef Rick Bayless just featured Contramar and the San Angel Inn in his latest PBS series of, Mexico, One Plate at a Time with Rick Bayless.  Check it out, Season 12, Episode 6. 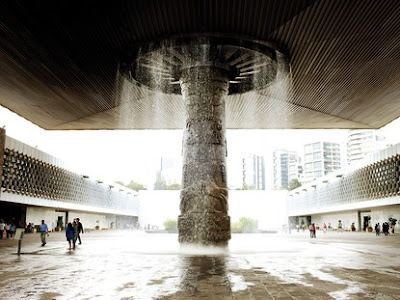 A full morning at the Museo Nacional de Antropolgia which houses a world-renowned Pre-Coloumbian collection.  The museum’s large, central patio is almost covered by a 275 foot canopy which sits on a 36 foot pillar, the largest concrete structure in the world supported by a single pillar.  Now that is what I call a fountain! 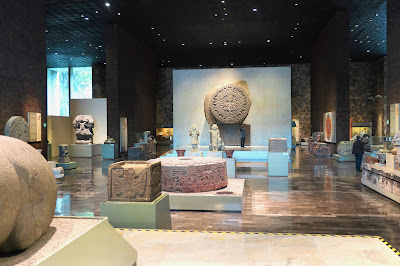 The collection in beyond description.  Not only is the collection magnificant, the building and gallery spaces are spectacular. 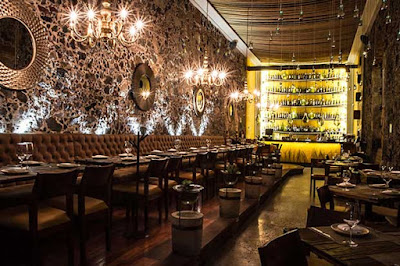 Cena (dinner) at Los Limosneros, a lovely restaurant that puts a contemporary twist on traditional Mexican cuisine.   The walls of this old structure date back to 500 years, part of the fortified walls built back in the days. 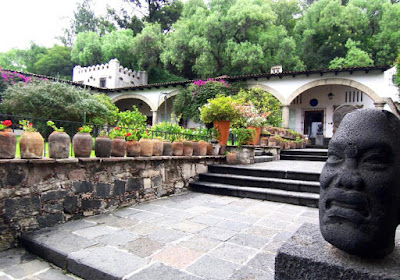 A visit to the Museo Dolores Olmedo, possibly the most important Diego Rivera collection of all belongs to this museum, ensconced in a peaceful 17th-century hacienda. Dolores Olmedo, a socialite and patron of Rivera, resided here until her death in 2002. 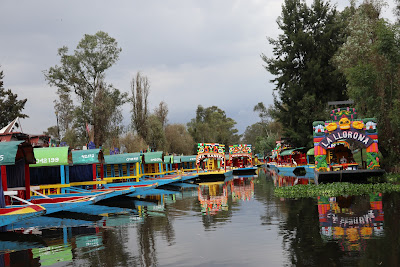 We will have a relaxing afternoon, touring and dining on one of the colorfully painted trajinera boats 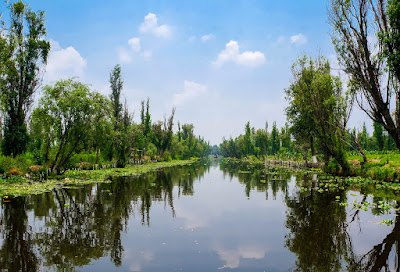 at the floating gardens (Chinampa) in Xochimilco.  Xochimilco, meaning “Place of the Flowers” in Nahuatl is famous for its Aztec-made waterways surrounding the ancient city of Tenochtitlan, which is now modern Mexico City. 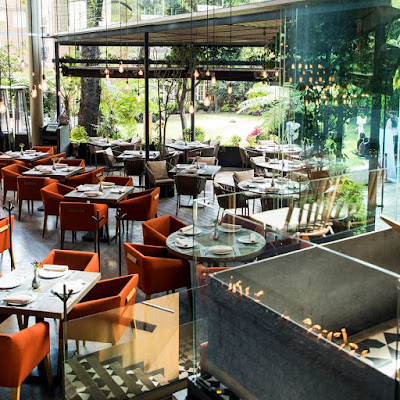 Another dinner in Mexico City will be at 99 Nueve Nueve.  Located on the gorgeous grounds of cultural center Casa Lamm, a Mexican Bistro with Chefs Luis Duran and Monica Beteta in charge of the kitchen where they create fantastic dishes with typical ingredients from all around the country.


For more information, please email me your name and any other contact information and I will send you a complete itinerary along with pricing, a deposit request form and plane travel information.  I am limiting this tour to a maximum of ten and I already have five signed on for the trip.  The five signed on have been on most if not all of my other tours!

TRAVEL THE AGES...
FROM THE COLONIAL TOWN OF PUEBLA
TO THE LAVISH CULTURE OF MEXICO CITY