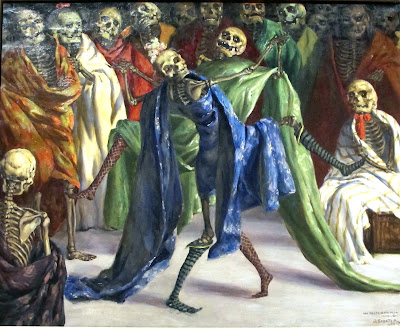 A Party of Mobilization Day
1936

Coming up on La Dia de Muertos, I thought I would share this wild painting with you.

Last time I was at the National Gallery d' Art de Catalunya in Barcelona, I was particularly drawn to this painting by Daniel Sabater Salabert -  (1888 - 1951).  He painted this during the Spainish Civil War.

Daniel Sabater Salabert was born in Valencia Spain on December 13, 1888.  Before heading to Madrid, he worked in a fan designer's studio.  In Madrid he was exposed to the work of Spanish masters such as Velazquez, Goya and Ribera.

Below are some examples of his paintings. 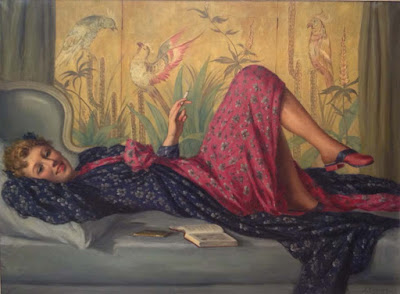 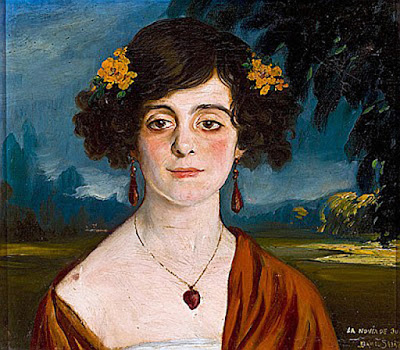 He painted military themes in his early career.  In 1912 he moved to Paris for a year where he was commissioned to paint religious compositions for the convent church of St. Vincent-de-Paul, which he executed in vibrant and luminous colors. 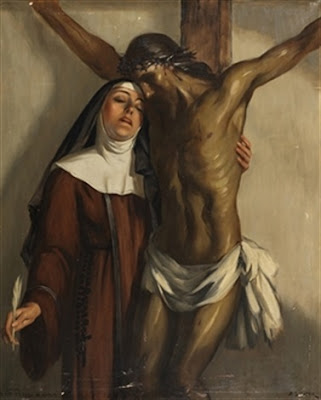 He returned to Spain and his canvases featured macabre scenes filled with witches and monsters.  This being his favorite subject, he became known as the "painter of witches." His color palette darkened and took on a sickly blue-green tinge. 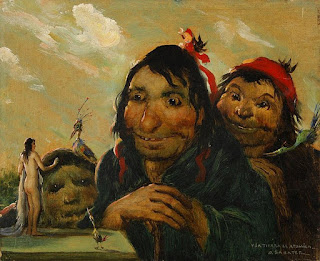 One can definitely see the influences of Goya in this painting.

After having an expose in Barcelona in 1920 and troubled with family problems, he traveled to the Americas where he had several exhibitions along the way for the next three years.

Sabater exhibited his work at the Sociedad Nacional de Bellas Artes in Madrid in 1910 and also exhibited in Uruguay and Brazil.

Today many of his works can be found in the Museum of Fine Arts in Valencia.


I will be leading a group to Northern Spain next September and while in Barcelona, a morning at the National Gallery d' Art de Catalunya is on the schedule followed by lunch in the museum's elegant Restaurant, Oleum, with its breathtaking panoramic views of the city.

Please email me if you are interested in joining me.  I am limiting it to a small group and I already have more than half the group filled.

Posted by Robin Mullen at 6:00 AM 0 comments

Email ThisBlogThis!Share to TwitterShare to FacebookShare to Pinterest
Labels: Spain

The patterns and textures of Oaxaca 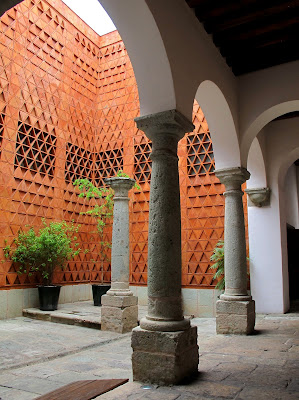 I just recently got back from leading a tour in Oaxaca with a wonderful group of people.  It was a full week exploring Oaxaca City and the surrounding areas, meeting the artisans, visiting the old ruins and the city's museums, dining at exceptional restaurants...
Every time I am in Oaxaca, I am constantly amazed by all the different patterns and textures in the Oaxacan architecture, design and textiles, all influenced by the ancient Zapotec culture.   This handsome brick pattern at the Textile Museum is a contemporary take on the stone work at Mitla. 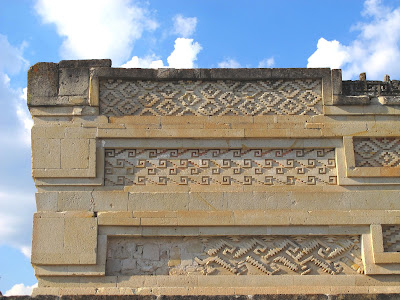 Mitla, a Zapotec city built in 800 A.D, is a treasure trove of ancient geometric designs. 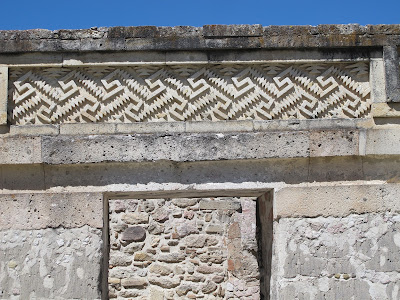 These designs are actually mosaics, stones that have been cut and been pieced together to create these intricate designs and patterns. 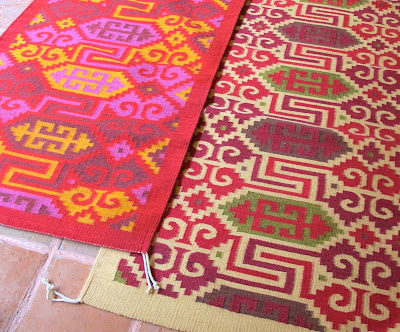 And these hand-woven rugs from Teotitlan de Valle emphasize the design motifs of ancient Mexico, a combination of influences from the Olmec, Zapotec, Mixtec, Aztec and Spanish heritage. 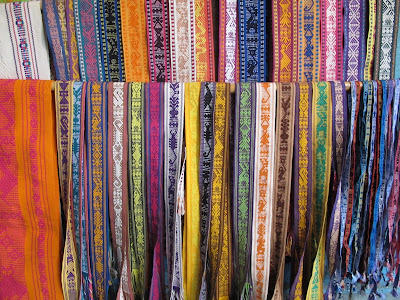 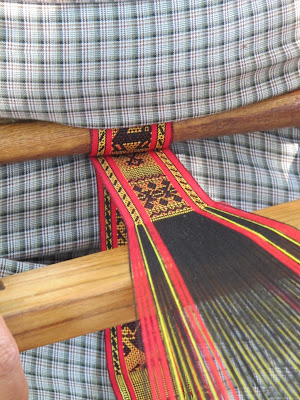 A close up of this finely woven belt in the works. 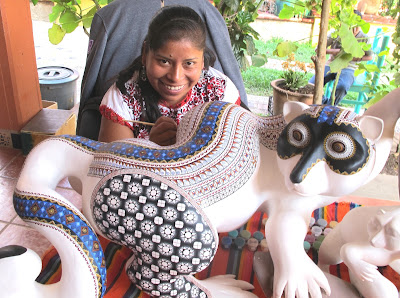 More ancient motifs are incorporated into the painted designs on this alebrije, a hand-carved wooden animal. 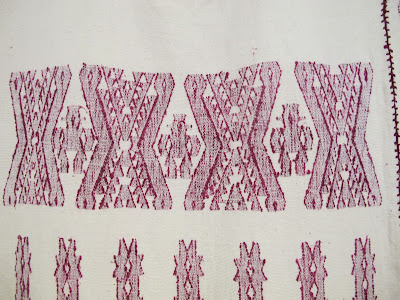 A close up of a woven huipil, a women's dress. 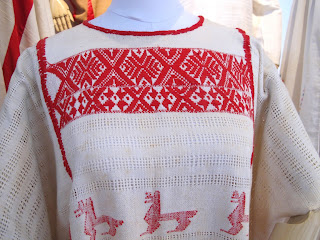 A huipil at the Belber Jimenez Museum that is home to an exquisite collection of traditional Oaxacan clothing. 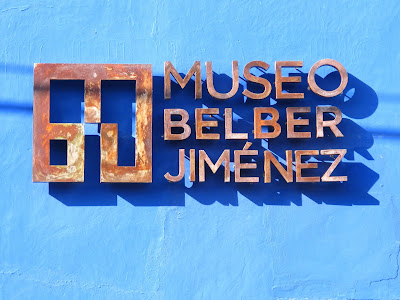 Even the signage for the Museo Belber Jimenez is beautifully executed with the geometric design incorporating the M, B and J. 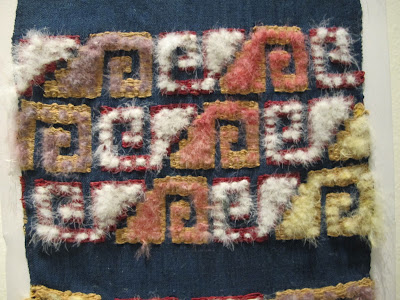 The current exposition at the Textile Museum showcases several pieces of clothing with feathers incorporated into the design.  Note the geometric designs similar to those found at Mitla. 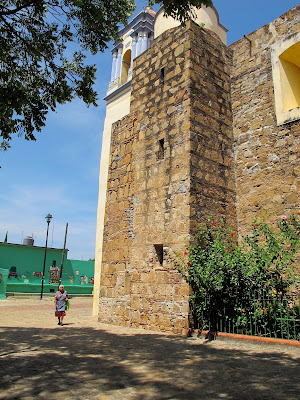 Of course I have to include some of the great old, adobe walls that have such tremendous texture and patinas.  This is the facade of the church right in Zaachila where we go to their Thursday market which is one of my all time favorites. 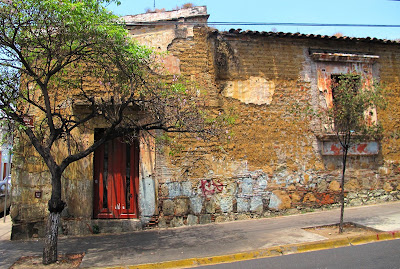 An old ruin right in the middle of historic Oaxaca City. 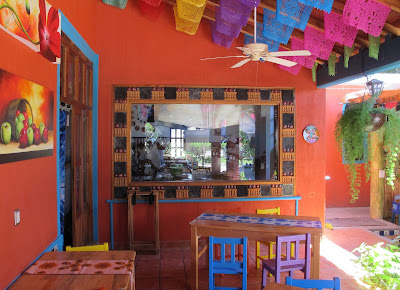 A special place to dine al fresco after leaving Ocotlan is La Azucena Zapotec.  Not only is the food delicious, the decor is so colorful.  Notice the frame around the window looking into the kitchen. 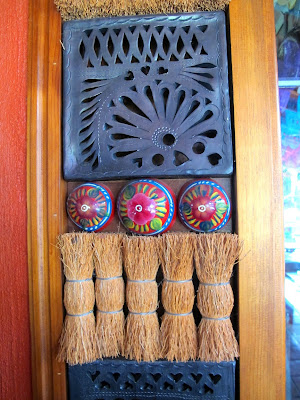 It is a combination of black cut out tiles from the town of San Bartola de Coyotepec with the scrubbing brushes used in the kitchen and the small hand-painted gourdes used for tasting Mezcal. 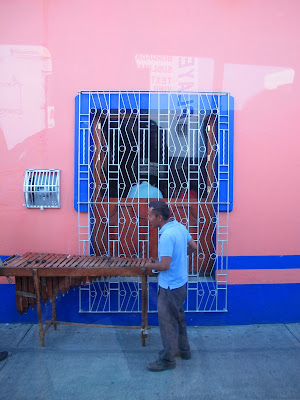 The pattern of the wrought iron has an art deco feeling to it but still influenced by the Zapotec designs. 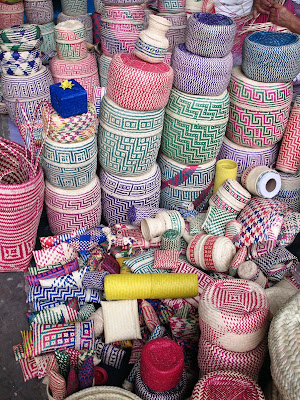 I have inherited my mom's passion for the beautiful craftsmanship in their basketry, especially the ones found in the Oaxaca valley.   These cylindrical designs and motifs can be found everywhere, especially in these palm frond baskets. 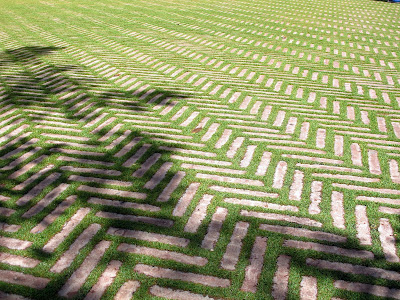 The herringbone stonework with its green, grass mortar is spectacular.  This is the courtyard of the San Pablo Academic and Cultural Center, originally the site of Oaxaca's first Dominican monastery. 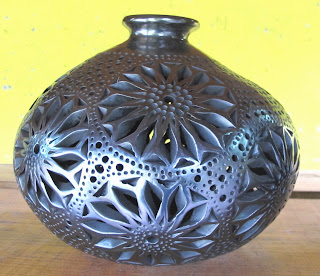 This distinctive black pottery is from the town of San Bartolo Coyotepec.  The pottery was made popular by Dona Rosa Real who mastered the ancient art and developed the shiny, burnished effect. 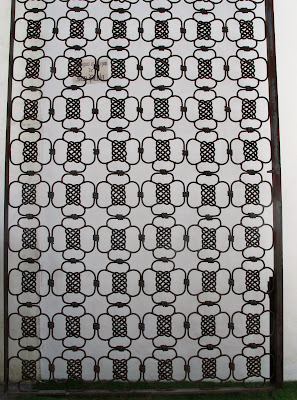 The pattern on this wrought iron gate leading into the courtyard of the San Pablo Academic and Cultural Center is so unique. 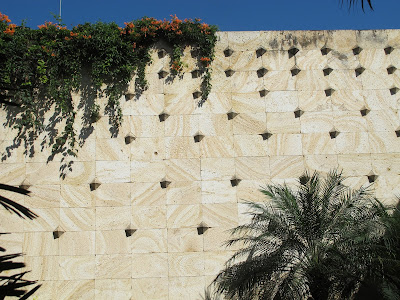 An accent wall in the courtyard of the MUFI, Museo de Filatelia de oaxaca (Museum of Philatelic and Numismatic arts).  This is the only museum of it kind in Latin America. 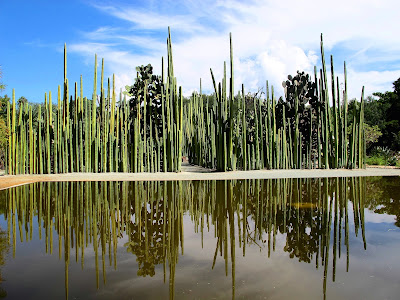 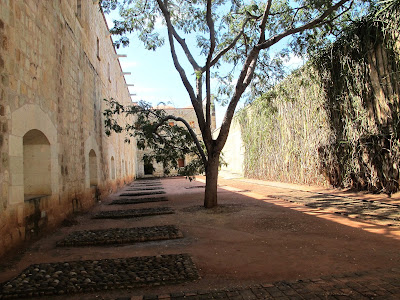 the stonework that is in rectangular plots that act as the filtration system for the run off of rain water as it pours through the downspouts (canales). 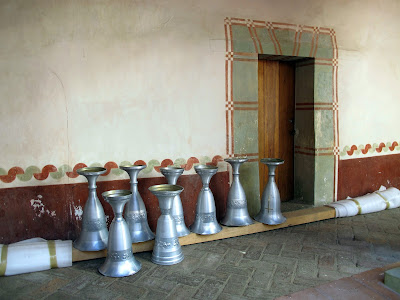 An then there is the simple fauna motif used as a border in the San Jeronimo Church in Tlacochahuaya.
Each visit I discover new designs using the ancient motifs.  I might be leading another tour next year in November.  Let me know if you are interested.  It's a great place to get lost in the culture for a week.
Posted by Robin Mullen at 6:00 AM 0 comments