The Wounded Shooting Star in Barcelona 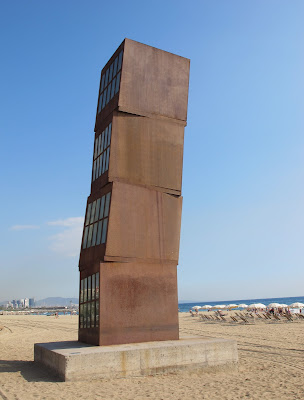 Walking around the Barceloneta area, we took a stroll along the beach.   This area was traditionally home to the fishermen and dock workers in Barcelona.  It was the first planned neighborhood in the city with its tiny grid of narrow streets set around spacious squares.
The sculpture above with its twisted cubes that seem to be haphazardly stacked upon each other is the creation of German artist, Rebecca Horn.  Titled L'Estel Ferit (The Wounded Shooting Star), locally referred to as The Cubes, reaches a towering height of ten meters and was installed just in time for the Olympics.
The early 1990's was an innovative time and the sea front was seeing some interesting sculptures dress up the rather neglected neighborhood.   Barceloneta's coastline was at one time dotted with numerous xiringuitos (bars and restaurants) that had fallen into disrepair and were eventually torn down before the crowds arrived for the Olympics.   The Cubes was Horn's homage to these old shacks and to the past.
I think it sits beautifully on the beach with the blue, blue sea as its backdrop!
Posted by Robin Mullen at 6:00 AM 0 comments 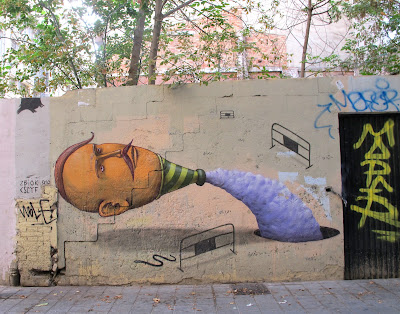 My husband and I were in Valencia, Spain for the day and we came upon some really creative street art.   The head coming out of the deep hole has Dali written all over it.  Is it really a politician's head escaping the gutter? 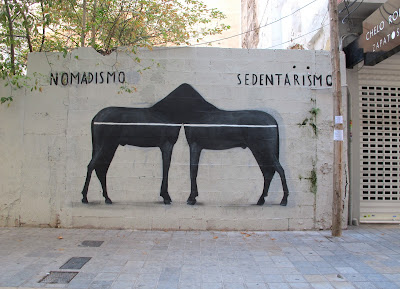 The two horses with the common head butting together to me shows the conflict of one who is nomadic and the other who is sedentary.  Or is it political gridlock.  Where do they go from here. 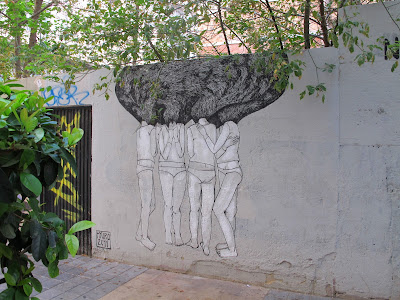 Communal thinking, where everyone thinks the same thing and they are blind to reality.  Or is it a really bad hair day that is just too "over the wall"? 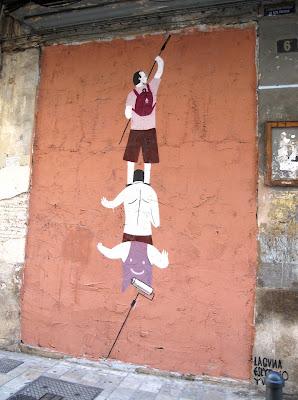 I love how the painters were painted on the building facade. And yes indeed, there was construction work going on over head!
Again, keep your eyes peeled and who knows what you will stumble upon.
Posted by Robin Mullen at 6:00 AM 0 comments

Creative Art is all around us! 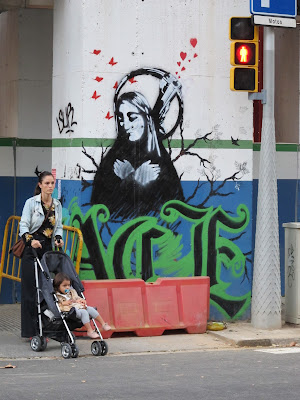 "The question is not what you look at, but what you see."
Henry David Thoreau
Many walk through life and do not see what is right in front of them.  When I was in Barcelona, I saw more than just the gorgeous architecture, the phenomenal restaurants and the beautiful shops.  I found some of the posters, painted doors and even some of the graffiti, around Barcelona pretty darn good. 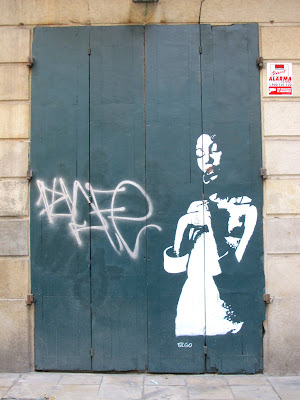 So simple but really nicely executed. Your eye fills in the blanks. 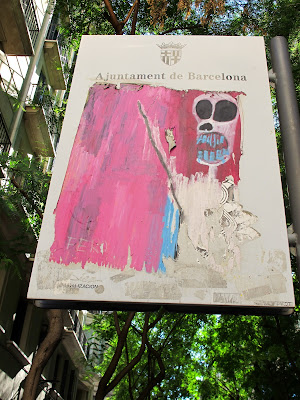 Being a fan of everything to do with Day of the Dead, I found this poster wonderful! 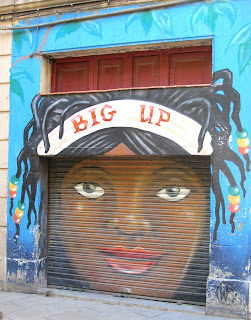 I have no clue what was behind this door.  Could it be a night club, a head shop, a hair salon... 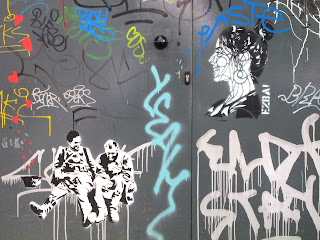 I like how the black and white art is surrounded by the colorful graffiti. 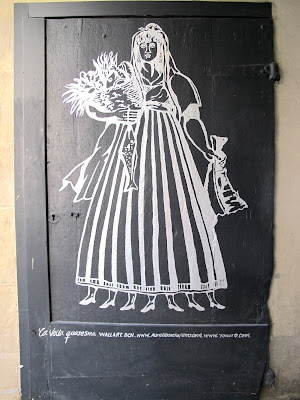 Near the Basilica Santa Maria del Mar, there was a door painted with this seven legged woman that caught my eye.  She is promoting an artist, Aurelio Cachafeiro, that designs and creates wall art along with the collaboration of a few other artists.  I checked out his website, www.aureliocachafeiro.com, and he has done some very cool installations.
There is talent around every corner, you just have to keep your eyes wide open!
Posted by Robin Mullen at 6:00 AM 0 comments 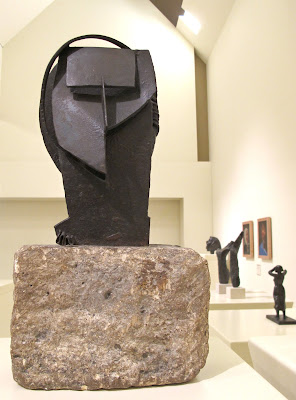 The Museu Nacional d'Art de Catalunya in Barcelona houses an impressive collection of sculptures and paintings by Julio Gonzalez.  Gonzalez was born is Barcelona on September 21, 1876.  At the age of 15, he and his brother, Joan, apprenticed in their father's metal smith workshop.  In the evenings, they both attended the Escuela de Bellas Artes. 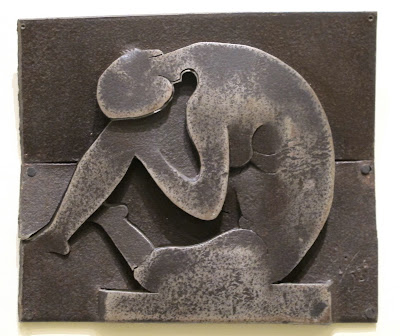 In the late, 1890's, he became a regular at Els Quatre Gats, a famous Barcelona cafe, where he first met Pablo Picasso.  In 1900 he and his family moved to Paris, never to return to his home town.   This is where he met Pablo Gargallo, a Spanish sculptor, who was a huge influence in his work.  His brother passed away in 1908 and Julio fell into a deep depression and lived in seclusion.  Picasso and Constantin Brancusi were his few contacts.
In 1918, he worked in the Renault factory at Boulogne-Billancourt and he learned the technique of autogenous welding.  This technique soon changed the way he created his sculptures. 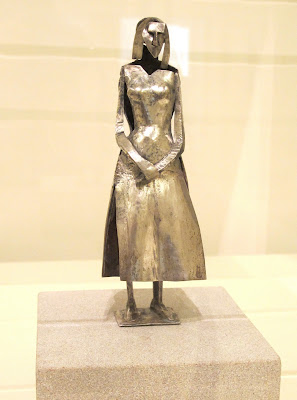 He produced his first sculptures made from wrought iron.  Many of his pieces were that of the human figure.  It was Julio who taught Picasso metal working in the late 1920's.  And it was Picasso's influence that Julio's works became more and more abstract.  His sculptures became more massive as time went by.
Due to the war, acetylene and oxygen became scarce and he had to abandon his sculptural work.  Instead, he took up drawing and modeling using plasticine and gypsum.

Painting was his first medium before he became involved in his metal working. 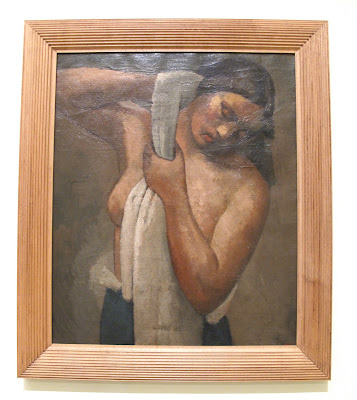 In 1937, he contributed some of his work to the Spanish Pavilion at the World's Fair in Paris and Cubism and Abstract Art exhibit at the Museum of Modern Art in New York.  That same year he moved to a town outside of Paris, Arcuell,  where he died on March 27, 1942.
My husband and I were really drawn to his work.  I can see why he was one of the most exceptional sculptors of the 20th century.
Posted by Robin Mullen at 6:00 AM 0 comments 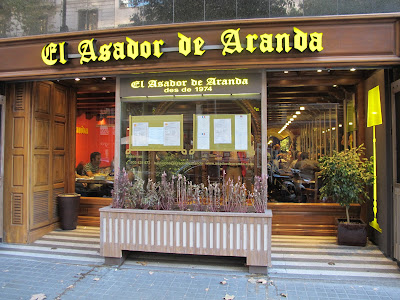 Ever since my husband, Len and I have been coming to Spain, roast baby pig (cochinillo) has been one of our all time favorite dishes along with suckling goat (cabrito).  Cochinillo is more readily available in eastern and northern Spain but El Asador has a few restaurants around Barcelona featuring our favorite dish.  El Asador de Aranda was a nice walk south on Via Laietana from our hotel, The Claris. 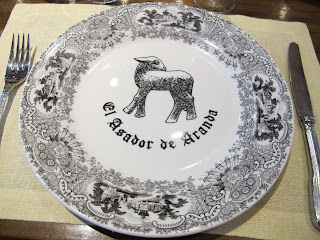 It was Sunday afternoon and we had just left the Palau Reial.   By the time we had arrived to El Asador de Aranda and were seated, families were coming in for their Sunday get together and it was not too much longer that the place had filled up.   I love the plates, reminded me of some plates my grandparents might have had minus the little lamb. 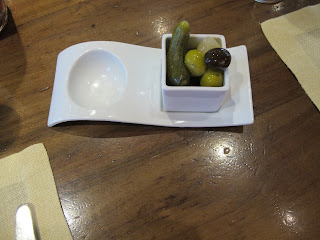 Then we were served some pickles and olives in this attractive contemporary dish.  Those who know me, know I do not like either one of those so Len had his fill. 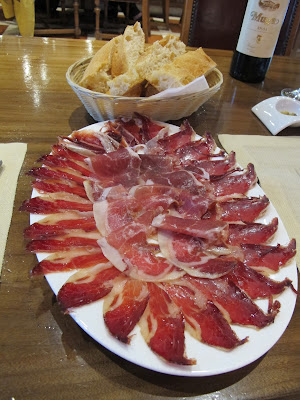 Of course we started with a beautiful plate of thinly sliced jamon ( ham).  Jamon is probable second to football in its popularity in Spain!  The process of curing Iberian ham takes years.  The best variety is "pata Negra" (black hoof) or "de Bollota" (of the acorn).  Pigs are raised on eating the black acorns from the Oak trees.  The Jamon de Bollota just melts in your mouth! 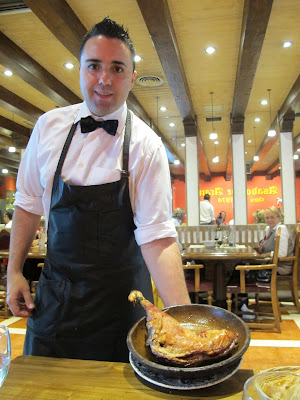 And then we were served the Cochinillo.  Its fatty skin was crisp while the meat was tender and juicy.  Just as wonderful as our last dining experience.  Buen Provecho!
Posted by Robin Mullen at 6:00 AM 0 comments

Like every day, each life has a dawning and a sunset by Robert A. Mullen 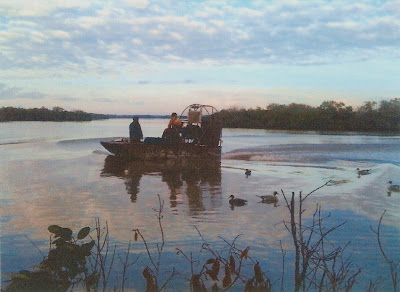 The photo above was taken a few years ago by son Carter as our air boat was setting decoys for our morning shoot in the ocean estuaries out from Ciudad Obregon, Mexico.  He and I were alone, just the two of us, in our own blind.  We had hunted the area for more than 20 years.  We shot dove in the farm fields and duck in little virgin waterways, hidden from the world but not from the blue bills, teal, redheads and Brandt.  I can still see them leaning on a wing, banking in, and then we would hear the hiss of their wings.
We huddled together out of sight, shoulder-to-shoulder, hidden.  There was a moment when I imagined he was that 12-year old, shooting some of his first birds.  Young, fresh, eager to learn with his whole life ahead of him.  The moment passed and now he was college age, maturing, bright, smart.  Then he was a grown man, successful in business and life, respected, admired and whispering to me about the flight coming in at 10 o'clock.  God gave me those magic moments, and I will never forget them.  What fun we had!  But today the duck blind is vacant.  Our gun barrels have cooled.  And I will hunt no more.
When James Fennimore Cooper wrote his famous novel, Last of the Mohicans, the old chief said this after the death of his son, Uncas:   "Why do my brothers mourn that a young man has gone to the happy hunting grounds, that he has filled his time with honor?"
Carter did, indeed fill his time with honor.  Today I suspect he is in that Indian Heaven, those Happy Hunting Grounds.  Here warriors and hunters enjoy a paradise of hunting and feasting.  And, astonished at Carter's wingshooting accuracy, they have named him "Long Rifle."  Rested and renewed, Carter is home.


In memory of Carter Kane Mullen, truly a man for all seasons.
1950 - 2011
Written by Robert A. Mullen - January 2012
rambob@cox.net
This was such a beautiful piece written by my father,
I just had to share it with you.
Posted by Robin Mullen at 5:01 AM 0 comments

Email ThisBlogThis!Share to TwitterShare to FacebookShare to Pinterest
Labels: Carter 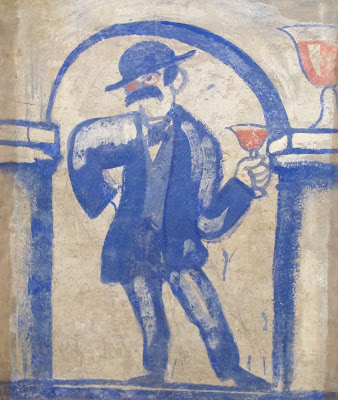 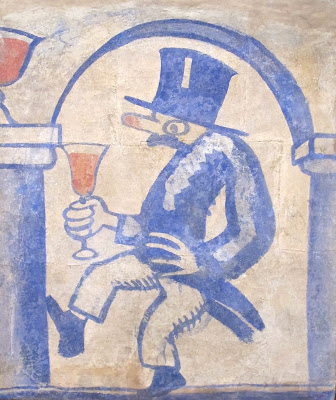 Santiago Segura was ahead of his time when he created a wine cellar in his well-known art gallery, the Galeries  Laietanes, in Barcelona in 1915.  The gallery was one of the meeting places for artists and intellectuals of the Noucentisme movement.  Noucentisme opposed modernism (the previous movement) and the bohemian lifestyle.  It was synonymous with order!  Joaquin Sunyer (a Barcelona artist/painter) and Joseph Puig (a Barcelona architect) were associated with this movement as was Xavier Nogues who is the artist of these delightful figures.
Xavier Nogues was commissioned to decorate the walls of the wine cellar where the wine tastings were held. He painted figures with a likable charm and slightly tipsy.  A satire on the human weakness.  He was also known for his enamelled glass and ceramic pieces.
Around 1945, the cellar sadly was turned into a storage room.   The murals had been done in tempura and they were stripped off the walls and put up for sale at the Sala Pares in Barcelona.  The Museu Nacional d' Art de Catalunya purchased all of them. 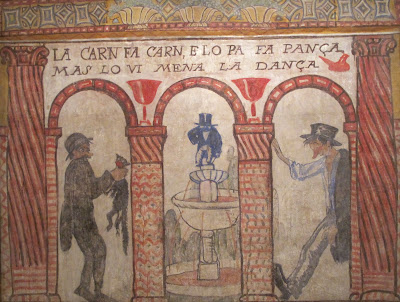 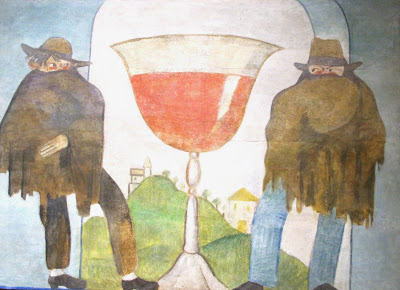 Happy New Year to everyone!
Wishing you prosperity and most of all, good health.
An apple a day may keep the doctor away,
but I prefer to take my chances with a glass of wine.
Salud!
Posted by Robin Mullen at 6:00 AM 0 comments