Tonina, Our first of many Maya ruins that we visited 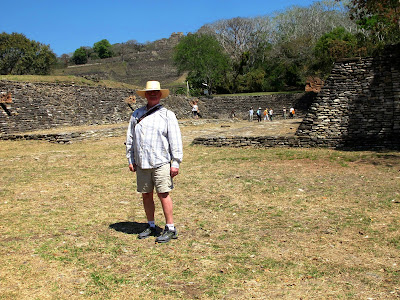 After leaving San Cristobal de Las Casas, Tonina was our first stop.  Tonina is one of the best Maya archaeological sites that sees very little visitors. We only encountered three other people and they were from Italy.
Here is Len standing in the ball court with the rest of my group in the background.
Tonina (Tzetltal Mayan for House of Stone) is believed to be the last major city to succumb to the abrupt collapse that hit the Maya in the 9th century. 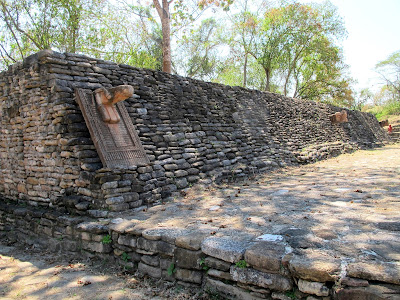 Tonina's major construction date to the Late Classic period (7 - 9AD), though there is evidence that the area was populated way before that; a stone monument was discovered dated 583AD.  This ball court is one of the Maya's largest, almost 200 feet long and unique with it's sunken construction. 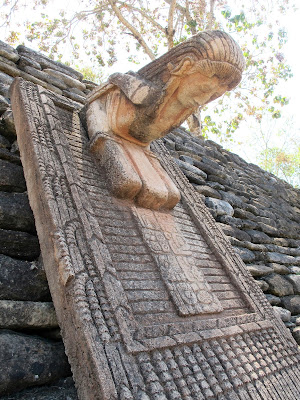 There was a long rivalry between Tonina and Palenque.   This rivalry is even depicted in the ball court with carvings showing images of prisoners. 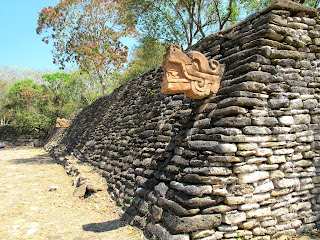 The other side of the Ball Court. 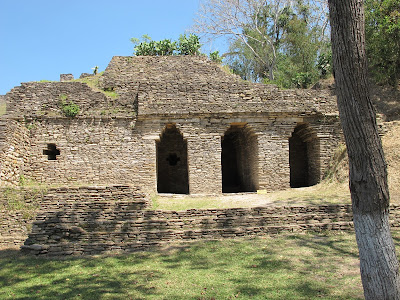 The Palace of the Underworld is entered via three step-vaulted arches on the eastern side of the second terrace of the Acropolis. 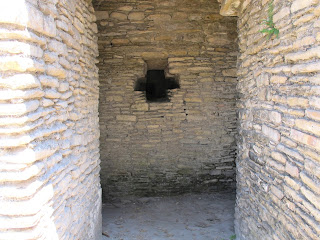 Ingenious architecture on how the cross shaped windows allowed light into the chambers. 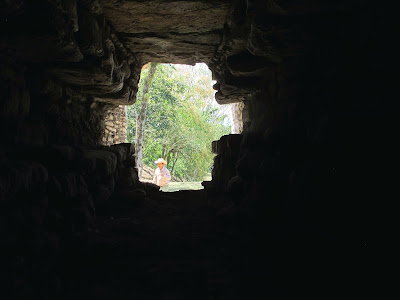 Looking out from one of the passage ways. 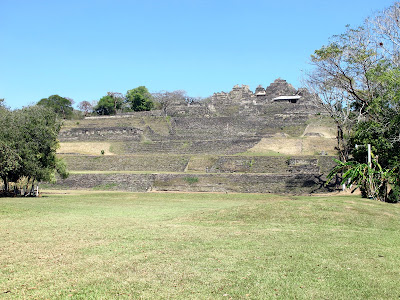 Recent excavations at Tonina by archaeologists from Mexico’s National Institute of Anthropology and History have shown the Maya city to be twice as large as predicted, with clearly defined districts, including areas of palaces, temples, housing, and administration.  Originally it had been thought that the Tonina acropolis had been built on a hill, but the excavations have shown that the mound covers a pyramid more than 240 feet tall, with 208 stone steps from its base to its apex. “It’s a big surprise to see that the pyramid was done almost entirely by the architects and therefore is more artificial than natural. This is because it was believed that almost every hill was a natural mound, but recent evidence has revealed that it was almost entirely built by the ancient inhabitants,” said Emiliano Gallaga, director of the site. More than 300 hieroglyphic texts have also been found. Some of them reveal the names of city rulers. 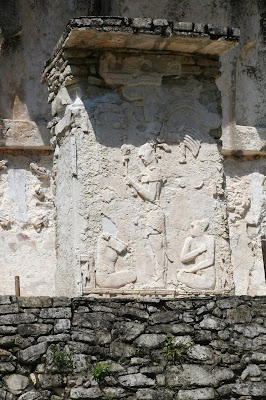 This Stele is very well preserved. 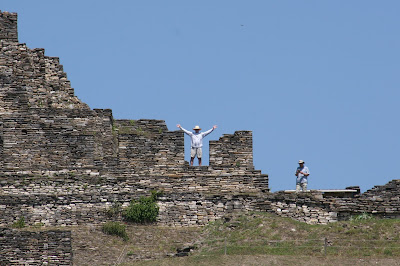 Len in the opening and Greg taking photos. 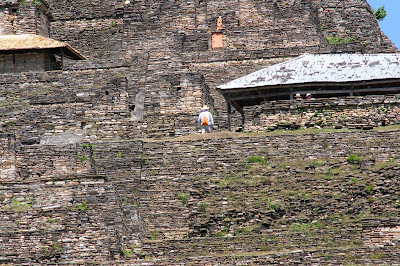 The stone work is magnificent! 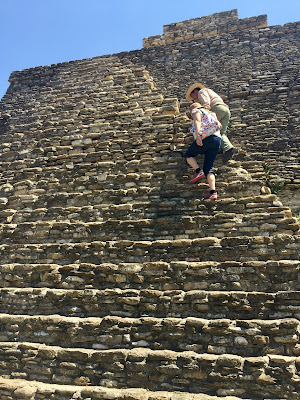 The climb up was steep and thank goodness for our helper! 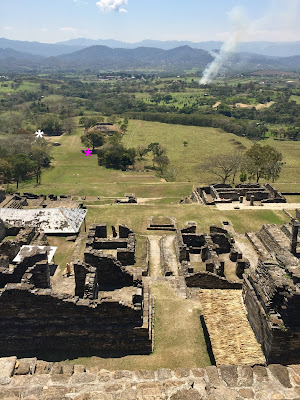 To give you a little perspective on how high you actually climb, the ball court is marked with a white astrix and the pink one is where I was sitting under the tree.  (Thanks Greg for the photo). 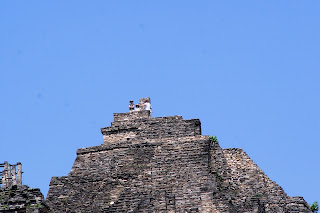 At the top, this structure is considered one of the tallest buildings of Middle America.

A panoramic shot by Greg.  What a magnificent view. 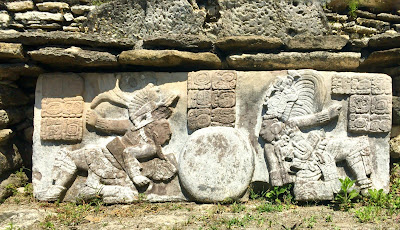 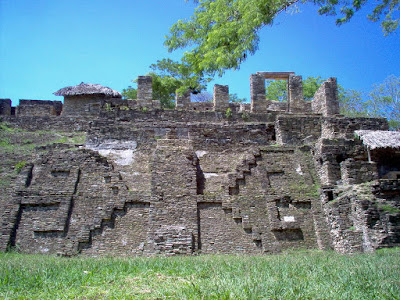 Located on the face of the third terrace of the Palace of Grecas and War is the zizaged cross design said to represent Quetazalcoatl. 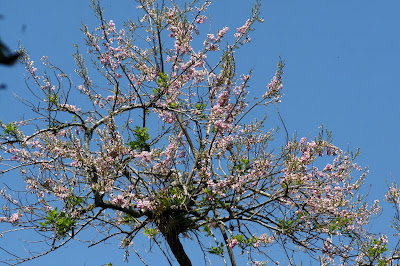 The trees were just starting to bloom and leaf out. 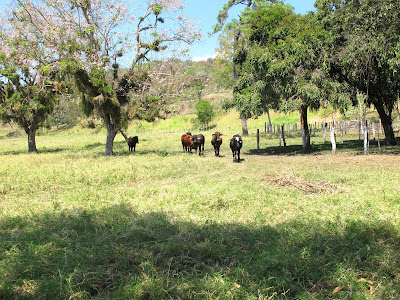 The setting could not have been any prettier or tranquil. 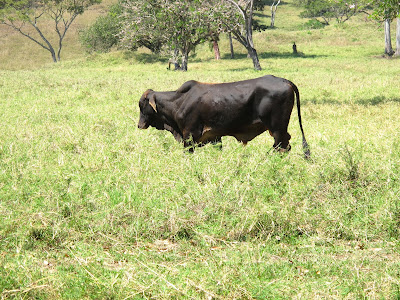 The cattle in this area are a cross between a Brahma and Brazilian. 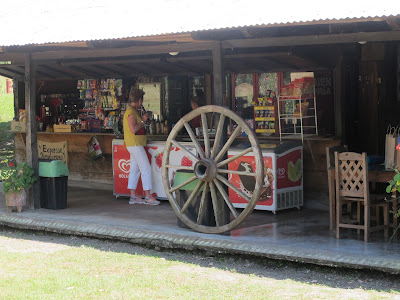 An open air restaurant at the entrance to Tonina is a great place to get an ice cold beer or two. 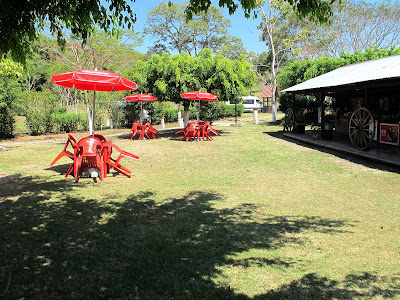 What a beautiful setting to have our picnic lunch after spending the morning at the ruins.  And what a perfect way to visit our first Maya ruin and practically have the entire site all to ourselves.

Email ThisBlogThis!Share to TwitterShare to FacebookShare to Pinterest
Labels: Chiapas