Julia Child would have been 100 today! 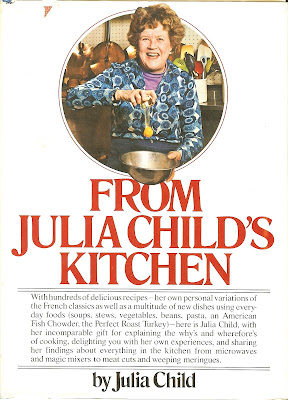 The first Julia Child's cookbook that I was given was from my Mom's mother, Rubie.  It had been part of her cookbook collection.  She had bought it in 1975 at Dayton's department store in Minneapolis, Minnespta for $15.00.  This was Julia's fourth cookbook; Mastering the Art of French Cooking, Volume 1 and 2 and The French Chef Cookbook had been published prior. 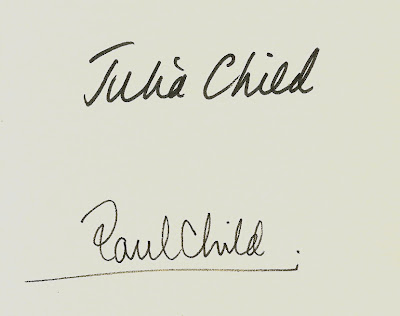 And it is a signed copy by both Julia and her husband, Paul! 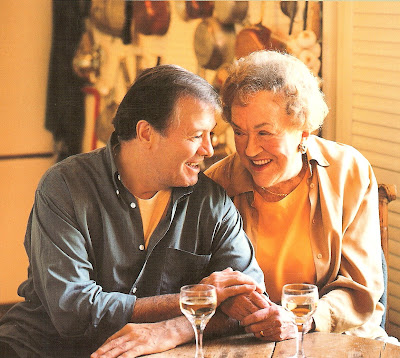 She was a pure delight when she cooked with Jacques Pepin.  They had such chemistry!  I remember one evening, late and I could not sleep so I turned on the TV and there they were.  She thought Jacque used too much garlic and he thought she used too much wine.

Julia had a wonderful teasing banter with Jacques.  They would cook together using an extravagant amount of butter as they prepared lavish meals for formal entertaining.  She was furious over the movement to use margarine instead of butter and I do not blame her!

Julia's sense of humor was wonderful.  At one her last appearances at the Aspen Food and Wine Festival, she told the audience how to cook a lobster in the microwave, "When it stops clawing at the door, he's done."  I think she shocked some of the crowd.

She could improvise beautifully.  On her PBS show, she had flipped an omelet.  It splashed all over the stove.  "Well, that did not go very well," she said as she scraped up the eggs and re-deposited them back into the skillet. "But you can always pick it up if you're alone. Who's going to see."

She was and still is an inspiration to trying new recipes, improvising and just getting into the kitchen and cooking up a storm.  Viva Julia Child.  Bon Appetit!!