Los Voladores are flying high in the jardin 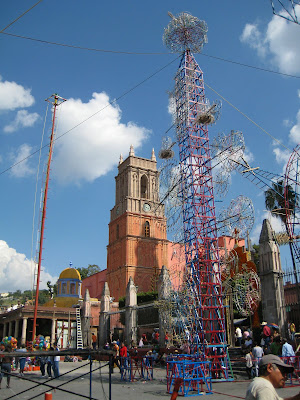 The Voladores are flying high in the jardin and I am not talking about about the amount of Tequila being consumed.  During the celebrations honoring Saint Miguel in San Miguel de Allende, Los Volodores de Papantla (the flying dancers of Panantla), are not to be missed. The blue and red structure is one big ole firework that goes off in sections called a Castillo (castle).  It is pretty spectacular.  The red pole to the far left that the Voladores temporarily erected can be as high as 150 feet tall.  Los Volvadores is a flying pole dance that is quite thrilling. 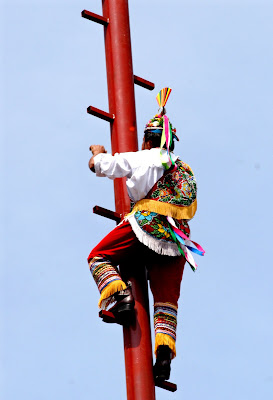 It is centuries old tradition, one that the Aztecs performed.  A tall pole is set up in the middle of a plaza, fitted with a small (and I mean small!) revolving platform on top.   Four fliers and a musician climb to the top. The flyers wear a hat with a crest of feathers which give reference to eagles or macaws, the birds dedicated to the sun. 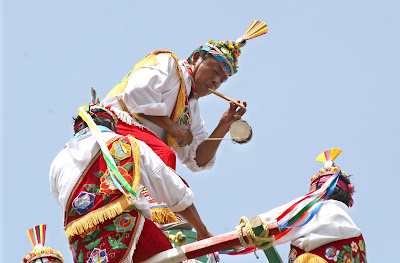 A ceremony is performed at the top on a small platform.  The musician (the captain) faces each direction and leans back, arching his back as he plays his flute and drum. 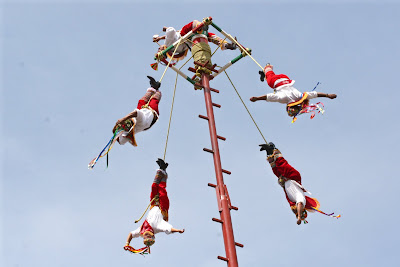 The other four men tie the ropes around themselves and fly down.  Making 13 revolutions around the pole and turning a somersault to land lightly on their feet as they reach the ground.  The captain increases the tempo of the music as they near the bottom.  They do not free themselves from the rope until the captain has joined them.  The captain slides down one of the ropes, reaching the ground at the same time as the flyers, without having stopped playing his instruments. Then they all take leave of the rope and dance around the pole.  The crowd goes crazy with applause and admiration. 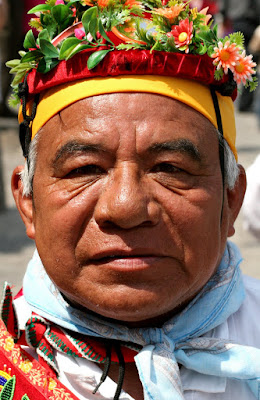 The flyers are the same year after year.  Age does not seem to be a factor. 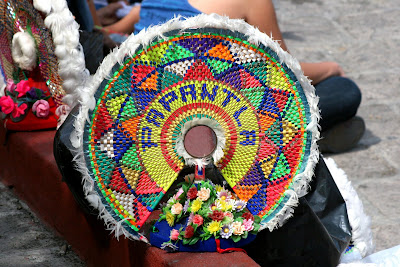 Some of the beautiful woven art from Papantla. 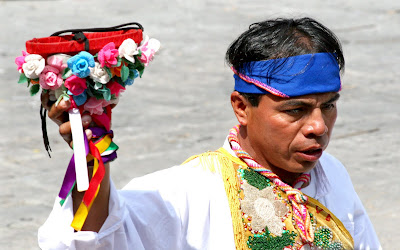 After all the excitement is over, the flyers go around soliciting a tip.  And why not, they deserve it!  It is a beautiful sight to see these bird men fly against the blue, blue sky in the jardin right in front of the Parroquia.