When I am in San Miguel de Allende with my group on one of my guided tours, I frequently get asked about the Catrinas and the origin of them. I was in Patzcuaro earlier this month and on the way over, I stopped in the town of Capula which is known all over Mexico for its clay Catrinas. So I thought I would write a little bit about the history of the Catrina. 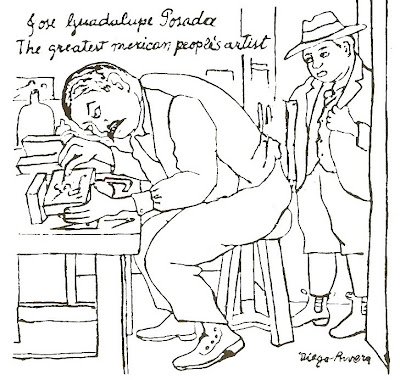 Jose Guadalupe Posada was born in Aguascalientes in 1852. It was his brother, a school teacher who taught him to read, write and draw. He then went on to the Academy of drawing and learned lithography and engraving. After teaching in Leon for a few years, he moved to Mexico City where he was an illustrator with La Patria Ilustrada whose editor was Ireneo Paz, the grandfather of the famous Mexican writer, Octavio Paz. He later became chief artist at the publishing house of Antonio Vanegas Arroya.

Pictured above is a drawing by Diego Rivera and Posada at his engraving table. Posada produced thousands of illustrations of miracle stories, games, advertisements, love stories, rare events, natural disasters, legends.... He wanted to make the Mexican aware of their conditions and provoke their emotions. Many being illiterate, these illustrations made a huge impact. 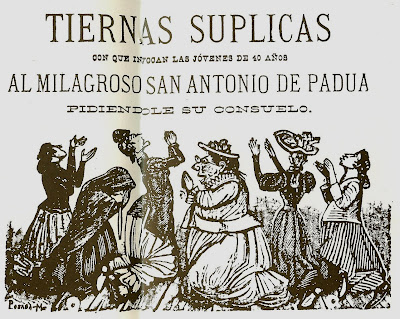 "Tender Entreaties - with which young girls forty years of age invoke the miracle working Saint Antonio of Padua, praying to him for comfort." In other words, these old maids are praying for St. Antonio to find them a husband! 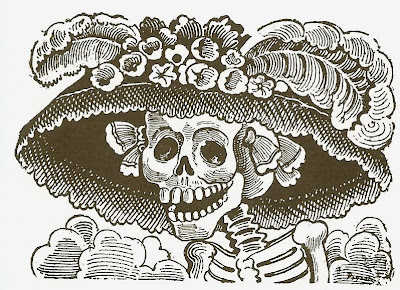 The fascination of the Mexican people with death goes way back to the time of the Aztecs. For the Aztecs, death signified not an end but a stage in a constant cycle. Worship of death involved worship of life, while the skull, the symbol of death, was a promise of resurrection.

Posada reached the peak of his artistic skills with the creation of the Calavera, the skeleton, as part of a political satire. This well known image of La Calavera Catrina is an etching that he did in 1913. The Catrina, a conceited female dandy, mocks the European-influenced ruling, upper class during the reign of Porfirio Diaz. The word Catrina is the feminine form of the word catrin, which means elegant. Today, the Catrina is one of the most popular figures of the Day of the Dead celebrations and a symbol that has been mass produced. 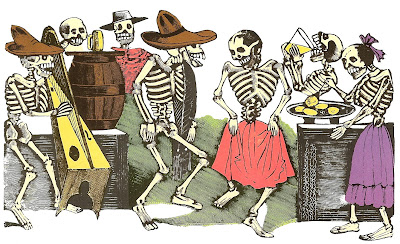 Posada's Calaveras assume various costumes as shown here with this Fandango. The Fandango is a style of folk dance and music. Two dancers face each other, dancing and tap-dancing, each taking turns as the "lead", trying to out dance the other. 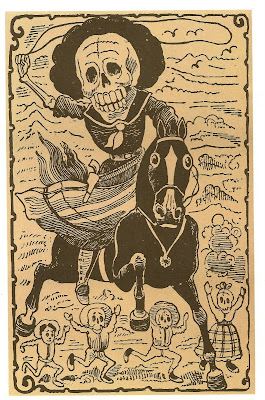 Posada vividly expresses the grim justice of the Revolution in this powerful Calavera. 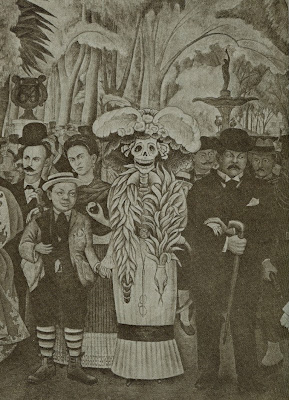 Many artist were influenced by Posada's works, muralist Jose Clemente Orozco and Diego Rivera. Rivera compared Posada to Goya in the way both artist portrayed the events of the time.
Above is a detail from Rivera's mural, Dream of a Saturday afternoon in Alameda Park. Posada is arm in arm with the Catrina, while Rivera is holding her right hand with Frida Kahlo behind him.
Jose Guadalupe Posada died at the age of 62 and was buried in a pauper's grave. It wasn't until shortly after the Mexican Revolution in the 1920's when French artist, Jean Charlot encountered Posada's illustrations while visiting Diego Rivera. While Posada died in poverty, his images live on as fine examples of Mexican folk art!
Posted by Robin Mullen at 5:00 AM