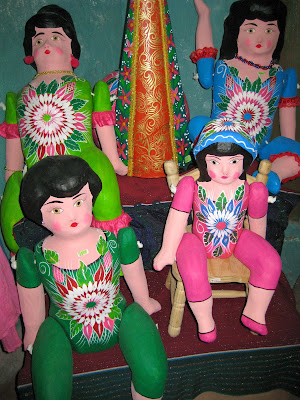 In my wanderings around San Miguel, I occasionally will buy a few of the wonderful and colorful papier mache dolls!

If you can believe it, papier mache originated in China, the inventors of paper itself. They used papier mache to make helmets which they strengthened with layers of lacquer dating back to the Han Dynasty (BC 202 - AD 220)! In Europe, the papier mache industry started in France and Spain in the mid 1700's. Eventually this craft came to Mexico and the papier mache dolls were created. They are commonly referred to as Munecas de Carton. Muneca in Spanish means doll and carton referrs to cardboard. They also have been called Munecas de Carnival, Las Lupitas and even, Munecas de Puta (puta meaning prostitute.)

Their painted on, old fashion looking swim suit has evolved. The hair styles have changed, earrings and glitter are more common and some even adorn a funny little hat. Many times there will be names painted on the front of their chest, like Lupita, Maria, Luz... I've never seen a Robin though.

There are several families in Celaya (less than an hour drive from San Miguel) that have been making the Lupitas for over a hundred years.

With a glue gun in hand, I secured these Lupitas to the top of the armoire in one of the bedrooms in my casa in San Miguel. Originally, I just had them sitting up there and my brother was tired of them falling over ever time he opened the armoire. Unfortunately, they will need skin graphs if I have to take them down! I particularly like the red head with the bee hive hair doo. 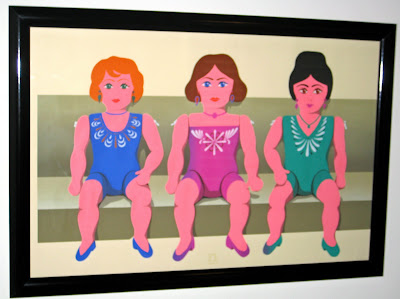 I bought this lithograph a while ago in a little store in San Miguel. I had it framed with a simple glossy black frame and it hangs in my guest bedroom. 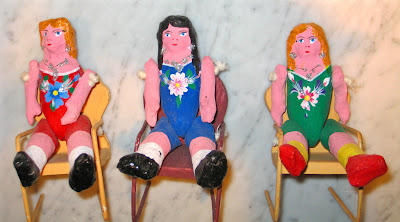 If you can believe it, bought several of these little chairs at Cost Plus a few years ago and I love to use them with my Lupitas as a centerpiece when having a Mexican dinner party. My Mom and I have decorated our Christmas tree at the casa in San Miguel with the girls. It's even fun to use a Lupita as a decoration on a birthday gift. 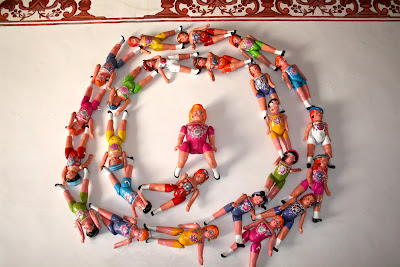 These Lupitas were cleverly arranged and glued on a wall in an entry of a beautiful home over in Patzcuaro. As an interior designer, I have always thought gluing them on the wall, standing up, like a border in a girls room would be great!
There are endless uses for these Lupitas!
You Go Girls!
Posted by Robin Mullen at 6:00 AM